A concrete material developed at the University of Michigan has the ability to heal itself when it cracks. Its developers claim that just a handful of rainy days would be enough to mend a damaged bridge made of the new substance.

The new material heals itself because it has been designed to bend and crack in narrow hairlines rather than break and split in wide gaps, as traditional concrete does.

In Li's lab, self-healed specimens recovered most, if not all of their original strength after researchers subjected them to a three per cent tensile strain.

Li said: 'We found that when we load it again after it heals, it behaves just like new, with practically the same stiffness and strength.'

The engineers found that the cracks must be kept below 150 micrometers, and preferably below 50 micrometers, for full healing. To accomplish this, Li and his team improved upon the bendable engineered cement composite – or ECC – they have been developing for the past 15 years.

More flexible than traditional concrete, ECC acts more like metal than glass. Traditional concrete is considered a ceramic. Brittle and rigid, it can suffer catastrophic failure when strained in an earthquake or by routine overuse.

But flexible ECC bends without breaking. It is studded with specially coated reinforcing fibres that hold it together. ECC remains intact and safe to use at tensile strains up to five per cent.

Traditional concrete fractures and cannot carry a load at 0.01 per cent tensile strain.

Li's concrete recipe ensures that extra-dry cement in the concrete exposed on the crack surfaces can react with water and CO2 to heal and form a thin white scar of calcium carbonate. In the lab, the material required between one and five cycles of wetting and drying to heal. 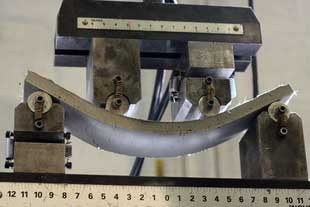 The university is now pursuing patent protection for the intellectual property, and is seeking partners to help bring it to market.