Sandia researchers have develop a method for constantly monitoring water for biological pathogens.

In late 2004, Sandia National Laboratories announced that it had signed a multiyear research agreement with Tenix Investments, a partnership that offered the vision of a safer future for water supplies.

The collaboration aspired to develop a method for constantly monitoring water for biological pathogens including biotoxins, bacteria, viruses, and protozoa. Now, just two-and-a-half years into the project, Sandia researchers have a working device in place and have demonstrated that the initial dream is, indeed, now a reality.

Sandia’s unattended water sensor (UWS) has successfully undergone testing at a large Bay Area water utility for more than a year and, just recently, has been deployed to a municipal water station in Arizona for additional observation and adjustments. Staff will perform periodic maintenance and troubleshooting on the system, which is expected to further demonstrate the viability of unattended water monitoring.

‘The initial research and development was focused on defining the system, identifying its core capability, and developing a concrete tool that does what we wanted it to do,’ said Chris Macintosh, Tenix Investment’s engineering manager. ‘Having now met those objectives and proven the capability of the technology, the next phase of the design will be to take this knowledge and develop a product suitable for use by the water industry.’

Macintosh said that other applications for the UWS include monitoring of agricultural water for contaminants, as well as water provided to sports stadiums and other venues.

The reservoirs, playfully referred to by Sandia researchers as the “juice bar,” contain chemical buffers, fluorescent dyes, proteins, and separation gel. This innovative diagnostic instrumentation package, based on Sandia’s MicroChemLab technology, is mounted near the water supply. The box is connected to a small, submerged probe that transports the sample into the system.

Largely due to the automated sample preparation, the UWS is currently able to achieve sample analysis in just 12 minutes - a marked improvement over the original goal of 30 minutes or less. 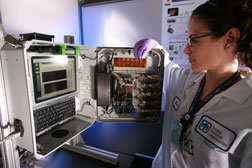 Sandia engineer Marci Markel displays the inside of the unattended water sensor.

According to Brent Haroldsen, who serves as Sandia’s lead engineer on the project, the UWS is currently able to detect protein toxins such as SEB, botulinum, and ricin. Haroldsen said the next phase of the Sandia activities will be to expand the device’s detection capability to include bacteria such as E. coli and protozoa such as Cryptosporidium.

‘To detect those kinds of pathogens, we will incorporate more advanced sample preparation techniques, which we have already developed for other projects,’ said Haroldsen. ‘This requires us to solubilize, or “break up” the cell into individual proteins. Detecting organisms also requires improved signature recognition capability to accommodate their natural variation.’

Sandia researchers, said Haroldsen, need to configure a working database of organism signatures to allow them to accurately distinguish the signatures from one another. He and his Sandia colleagues are looking at approaches that will help define the level of specificity the UWS will be able to achieve.

One such method, for example, is the Bayesian approach - a well-known approach to data analysis that casts statistical problems in the framework of decision making. Haroldsen says that the technology used in the UWS could clearly discriminate between types of organisms such as bacteria or viruses, 'as long as we appropriately account for their natural variability.'

Haroldsen says that ensuring the reliability of the components used to develop this prototype - which are small and intricate - is a challenge that he and his colleagues have embraced with gusto. Sandia invented many of the components, such as a suite of microfluidic fittings, manifolds, and interconnects, because no commercial products were available to reproducibly handle slight amounts of fluids.

The UWS is expected to operate for at least three months in Arizona. Sandia and its partners would then like to bring the system to an Environmental Protection Agency facility or the US Army’s Edgewood Chemical Biological Center, where it can be tested in a real-world environment that includes analysis on bona fide toxic agents situated in authentic water supply conditions.
‘We’ve made really good progress and have proven that the concept works,’ Haroldsen said.