Engineers at UC Irvine plan to outfit their local water system with sensors that will alert officials when and where pipes crack or break.

Engineers at UC Irvine plan to outfit their local water system with sensors that will alert officials when and where pipes crack or break thanks to a $5.7m (£3.5m) grant from the US National Institute of Standards and Technology and several local water groups.

About 240,000 water-main breaks occur per year in the US according to the Environmental Protection Agency, and water system failures are estimated to waste up to 6bn gallons of drinking water every day.

They will detect vibration and sound changes that could indicate pipe problems. Through antennae, the sensors will relay information wirelessly over long distances to a central location for recording, processing and analysis.

Initially, the sensor network will cover about one square mile of the local water system; eventually, it could encompass more than 10 square miles, the largest of its kind to date.

The research team is now designing a system that functions underground as well as over a larger area. The main hurdles, Shinozuka says, are powering the sensors (batteries and solar energy are not powerful enough), making them more cost effective and robust in tough environments, and achieving long-range wireless communication efficiently and accurately.

Using existing pipe networks, the team will then test and calibrate the sensors by simulating and monitoring pressure changes equivalent to those arising from actual pipe damage. The sensors will complement an existing Supervisory Control and Data Acquisition system. 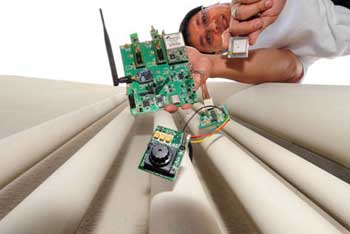 ‘SCADA sensors are too sparsely placed for identifying damage with the kind of precision we desire when a large earthquake or other natural hazard affects many locations,’ Shinozuka said.

‘An isolated malfunction is far different from a situation in which pipes break all over the place,’ he added. ‘Our next-generation system will inform us as soon as possible when and where damage occurs and to what extent so we can better mitigate the consequences.’

As the research progresses, the team also plans to develop methods of rapidly repairing pipe damage at joints and other vulnerable locations.