Imagine a skyscraper with floors that each rotate independently at different speeds. That's the idea behind architect David Fisher's Dynamic Towers.

Imagine a skyscraper with floors that each rotate independently at different speeds. That's the idea behind architect David Fisher's Dynamic Tower, which, once built, would be the world's first 'moving' building.

Because each floor of such a tower would rotate independently, the building would constantly change shape, resulting in a unique and evolving architectural structure.

The tower would also be designed to be self-powered, generating its own electricity, as well as power for other nearby buildings, with wind turbines fitted between each rotating floor. 'An 80-story building would have up to 79 wind turbines, making it a true green power plant,' Dr Fisher said.

The skyscraper itself could be built entirely from prefabricated parts that are custom made in a workshop, resulting in cost savings. The approach - known as the Fisher Method - requires far fewer workers on the construction site, lowering costs.

Indeed, Fisher believes that construction of one tower would require only 600 people in an assembly facility and 80 technicians on a construction site, instead of the 2,000 workers usually required to erect a traditional building of a similar size.

The Rotating Tower might make its first appearance in Dubai in the United Arab Emirates, if Fisher has his way. This week, he said that a 420 metre, 80 floor tower would be be constructed there housing apartments ranging in size from 124 to 1,200 square metres. But although he has received a development license for construction in Dubai, he has not disclosed the site of the building, according to CNN reports. 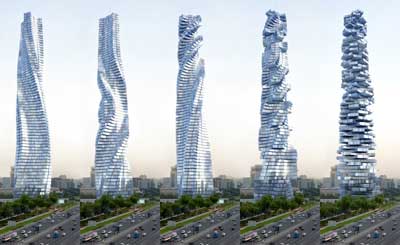 Dr Fisher also announced that a second Dynamic Tower was planned for Moscow and a third in New York.