Silicon carbide nanotubes have been found to add strength to the ceramic composite materials NASA is using for its next generation of rocket engines. 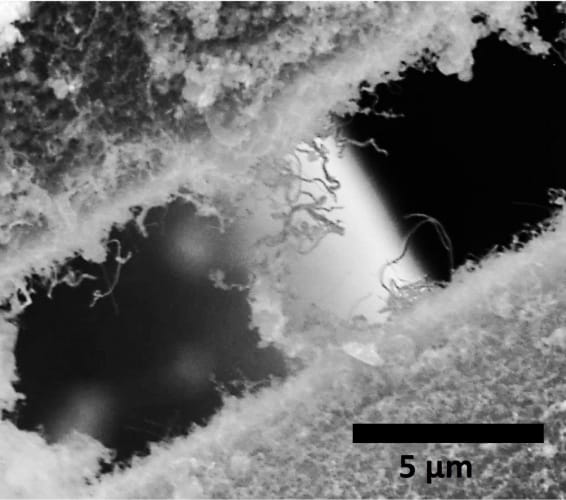 Developed by researchers at Rice University, the nanotubes have loops and curls on their exposed surfaces. Acting like Velcro, the nanomaterials hook into the surface of the ceramic materials NASA is deploying on its latest engines. The silicon carbide nanotubes strengthen the composite materials beneath and also prevent exposure to oxygen which can cause cracking.

"[Hurst] was partially converting silicon carbide from carbon nanotubes," Hart explained. "We used her formulation and my ability to grow nanotubes and figured out how to make the new composite."

The Rice team grew the nanomaterials by first bathing silicon carbide fibre in an iron catalyst and then using water-assisted chemical vapour deposition to embed a carpet of carbon nanotubes directly into the surface. The fibres were then heated in silicon nanopowder at high temperature, converting the carbon nanotubes into a silicon carbide "fuzz”. The researchers believe this “fuzz” will help NASA’s ceramic composites withstand higher temperatures than normal.

"The silicon carbide fibre they already use is stable to 1,600°C," said Tiwary. "So we're confident that attaching silicon carbide nanotubes and wires to add strength will make it even more cutting-edge."

According to Hart, the new materials should also help dramatically reduce the weight of the engines.

"Before they used silicon carbide composites, many engine parts were made of nickel superalloys that had to incorporate a cooling system, which added weight to the whole thing," she said.