Advanced imaging technology that could help avert fatal road tunnel fires is being trialled by engineers at Siemens in Germany.

The system, which uses a combination of video cameras, thermal imaging equipment and RFID technology, has specifically been developed to monitor lorries for signs of damage as they approach a tunnel. 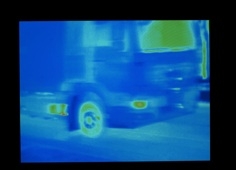 The system uses video and thermal imagining cameras to detect vehicle parts such as brakes, wheels and engines that are running hot before the lorry enters the tunnel.

This runs alongside an RFID based system, in which tags attached to a truck transmit precise information about the vehicle’s cargo before it enters the tunnel. Researchers believe this could offer significant benefits over the placards usually used on hazardous goods transport trucks which are barely legible in poor weather. With the help of special algorithms, this data query can even take place with the truck travelling at full speed. The system uses battery-powered, active RFID tags because of the required range of 50 meters. The group has also developed a so-called crypto-chip that prevents the interception and the alteration of the transmitted data.

Both systems are being developed as part of the Protection of Critical Bridges and Tunnels on Roads research project sponsored by the German Federal Ministry of Education and Research.

The system is currently undergoing trials at the Aubinger Tunnel near Munich.