Engineers at the University of Michigan have developed a carbon nanotube-coated yarn that conducts electricity and detects blood.

After being dipped just a few times into both solutions and dried, the yarn was able to conduct enough power from a battery to illuminate a light-emitting diode device.

'After just a few repetitions of the process, this normal cotton becomes a conductive material because carbon nanotubes are conductive,' said Nicholas Kotov, a professor in the departments of Chemical Engineering, Materials Science and Engineering and Biomedical Engineering.

The only perceptible change to the yarn was that it turned black, due to the carbon; otherwise it remained pliable and soft.

To put the conductive property to use, the researchers then added the antibody anti-albumin to the carbon nanotube solution.

Anti-albumin reacts with albumin, a protein found in blood.

When the researchers exposed their anti-albumin-infused smart yarn to albumin, they found that the conductivity significantly increased.

Clothing made from the yarn could be useful in high-risk professions.

An unconscious firefighter, ambushed soldier, or police officer in an accident, for example, may not be able to send a distress signal to a central command post.

Kotov said that  a communication device such as a mobile phone could conceivably transmit information from the clothing to a central command post. 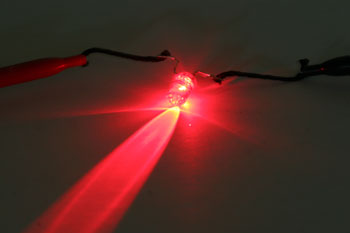 This carbon nanotube-coated smart yarn can conduct enough electricity from a battery to power a light-emitting diode device. Researchers can use its conductivity to design garments that detect blood