Researchers at UCLA have developed a portable smartphone attachment that can be used to perform field testing to detect viruses and bacteria.

Aydogan Ozcan, a professor of electrical engineering and bioengineering at the UCLA Henry Samueli School of Engineering and Applied Science led a team that developed the lightweight device.

‘This cellphone-based imaging platform could be used for specific and sensitive detection of sub-wavelength objects, including bacteria and viruses and therefore could enable the practice of nanotechnology and biomedical testing in field settings and even in remote and resource-limited environments,’ Ozcan said in a statement. ‘These results also constitute the first time that single nanoparticles and viruses have been detected using a cellphone-based, field-portable imaging system.’

The research is published in the American Chemical Society’s journal ACS Nano.

Capturing clear images of objects such as a single virus or a nanoparticle is difficult because the optical signal strength and contrast are very low for objects that are smaller than the wavelength of light.

In the ACS Nano paper, Ozcan details a fluorescent microscope device fabricated by a 3D printer that contains a colour filter, an external lens and a laser diode. The diode illuminates fluid or solid samples at an angle of roughly 75 degrees. This oblique illumination avoids detection of scattered light that would otherwise interfere with the intended fluorescent image.

Using this device, which attaches directly to the camera module on a smartphone, Ozcan’s team was able to detect single human cytomegalovirus (HCMV) particles.

HCMV is a common virus that can cause birth defects such as deafness and brain damage and can hasten the death of adults who have received organ implants, who are infected with the HIV virus or whose immune systems otherwise have been weakened. A single HCMV particle measures about 150nm to 300nm.

To verify these results, researchers in Ozcan’s lab used other imaging devices, including a scanning electron microscope and a photon-counting confocal microscope. These experiments confirmed the findings made using the new cellphone-based imaging device. 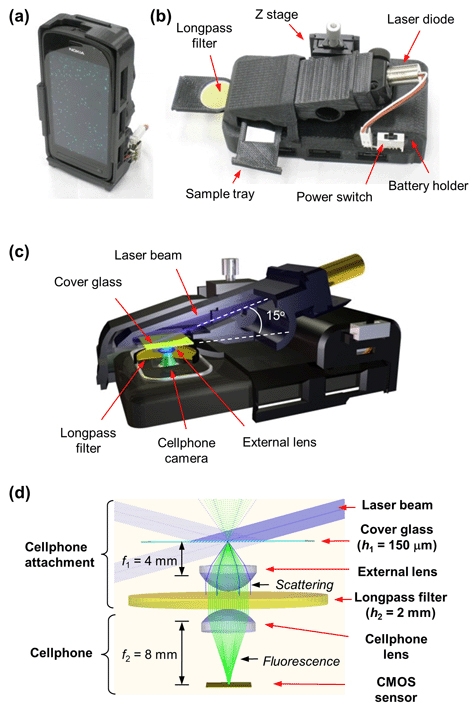