Taking optical diagnostics to communities in developing regions can help prevent development of conditions that lead to blindness, with a little help from astronomy

A hand-held device that will allow ophthalmologists to look inside patients’ eyes to see the area of the retina that captures high-resolution images without first having to artificially dilate the pupils could make it easier to make earlier diagnosis of vision-threatening conditions, according to its inventors at Rice University in Houston, Texas.

The device was invented specifically for use in poorer countries where, using smartphones and a technique originally developed for astronomy, it could be taken out to patients to use in their own communities, rather than them having to travel to clinics.

The device is called mobileVision, and was developed by engineering researcher Adam Samangieno, graduate student Vivek Boominathan, and electrical and computer engineers Ashok Veeraraghavan and Ashutosh Sabharwal as part of Rice’s Scalable Health Initiative, which aims specifically to develop equipment for use in developing regions.

Normally, to image the retina, patients need to have uncomfortable eye-drops administered which, over some minutes, dilate the pupils; then clinicians use bulky, expensive equipment to look inside the eye and take pictures of different areas of the retina. The mobileVision device is designed to be used by the patient rather than a clinician and gives a view inside the eye without the need for dilation, allowing a region called the macula, where the light-sensitive cells of the retina are most dense are the highest resolution images are formed, to be imaged.

‘Degradation of the macula immediately degrades your eyesight,’ Samaniego said in a statement. Rice is one of a number of institutions using the increasingly sophisticated cameras in smartphones, which are in very wide use even in resource-poor nations, for application such as this.

The mobileVision device contains movable optics which allow the patient to shift his or her view around the inside of the eye. When looking into the device’s eyepiece, the patient sees a target in the shape of a large, dark red disk. Moving the device optics changes the appearance of this disk, and when the device is brightest and most uniform, the optics are pointing straight at the macula. At this point, the patient presses a button that moves the target aside so a camera attached to the device can take pictures, assisted by a battery-operated lamp.

‘The dark target induces pupil dilation naturally,’ said Samaniego. ‘When you present the subject with a stimulus that isn’t throwing a lot of photons at it, the eye dilates to collect more light to get a better look.’ 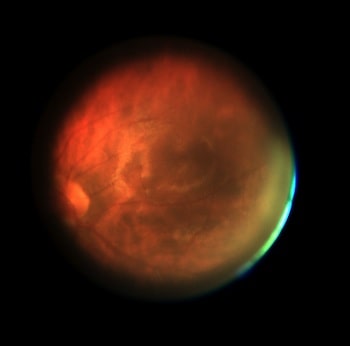 The lamp illuminating the retina starts the pupil constricting again, so there are only a few hundred milliseconds to take pictures. In the field, a smartphone would capture this short viewing window in video mode, break this video down into a series of still images, then send this stream to a clinic where the images would be analysed by a computer and the ones with the best images of the macula fused together to create an enhanced image. Known as ‘lucky imaging’, this technique was developed to enhance images from ground-based telescopes to correct for the blurring effects of atmospheric disturbance.

The images can then be viewed by doctors to identify patients whose eyesight is at risk from conditions such as macular degeneration, caused by blood vessels growing across the retina, or diabetic retinopathy. They can then visit the patients to provide therapy.