A industrial designer has won an award from the Norwegian Design Council for developing a new type of hardhat.

For thirty years, hardhats eally haven’t changed all that much - either in looks or functionality.

But industrial designer Tore Christian Bjørsvik Storholmen has changed all that. He’s developed one that is smarter than current models in more than one sense.

For his efforts, Storholmen, who works at the Sintef Health Research  in Norway, has recently won an award from the Norwegian Design Council.

‘The shape of my ‘ProActive’ hardhat was inspired by the baseball cap which has long been popular headgear in the construction industry,’ explained Storholmen.

He chose the design because he was well aware that workers are more likely to wear protective equipment that they feel comfortable wearing. However, the ‘smart’ concept refers to more than the appearance of the new hardhat.

In fact, the new ProActive helmet shouldn’t really be called a hardhat at all. Lined on the inside with a material that is soft and flexible under normal conditions, it only becomes hard and shock-absorbent if the helmet is subjected to impact or blows.

‘The material on the inside makes my helmet more comfortable in everyday use, and at the same time, safer than traditional models,’ said the prize-winner. 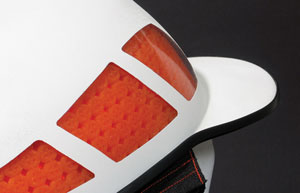 Storholmen has also made parts of the outer shell transparent, so that the shock-absorbent material is visible from the outside.

What is more, radio links or gas detectors can all be mounted on the helmet according to the requirements of an individual user.