Solar glass darkens as it converts light to electricity

Researchers in the US have created a new type of solar glass that changes from clear to tinted as it heats up and produces electricity. 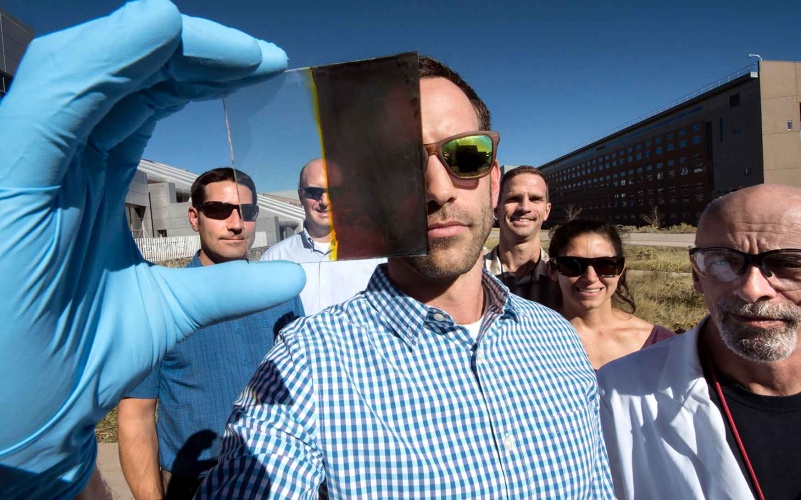 The material, which uses perovskites and single-walled carbon nanotubes, was developed at the US Department of Energy’s National Renewable Energy Laboratory (NREL). When solar energy heats the glass, methylamine molecules are driven out, darkening it. As the device cools, the molecules are re-absorbed into the glass, and it changes from tinted back to clear. A paper in Nature Communications describing the work claims a solar power conversion efficiency of 11.3 per cent.

According to the researchers, the device allows an average of 68 per cent of light in the visible portion of the solar spectrum to pass through when it’s in a transparent - or bleached - state. When the window changes colour - a process that takes about three minutes of illumination - only three per cent is allowed through. Wheeler believes the technology could be used in buildings and vehicles to power things like batteries, smartphones and onboard electronics.

Using a 1x1cm square of the material under typical illumination conditions, the team cycled it from clear to tinted multiple times. A decline in performance was noted over 20 cycles due to restructuring of the switchable layer, and research will now focus on improving the reliability and longevity of the solar glass. In the meantime, Wheeler, alongside NREL colleague and paper co-author Robert Tenent, has already begun exploring the commercial potential of the product under the name SwitchGlaze.

“There are thermochromic technologies out there but nothing that actually converts that energy into electricity,” Wheeler said.