A formation of thousands of antennae over 3,000km 2 will form the largest-ever telescope.

UK universities are leading the design study for what will become the world’s biggest telescope. The Square Kilometre Array (SKA), which received substantial EU funding last week, will be an international radio telescope consisting of at least 10,000 antenna stations.

Occupying a vast 3,000km 2 of land — possibly in Africa — the surface area of the SKA’s combined antennae adds up to the ground area from which it takes its name.

Dr Paul Alexander, from Cambridge University’s Cavendish Laboratory, is leading the UK side of the design study alongside colleagues at Oxford and Manchester universities. He said that SKA will provide astronomers with an unprecedented amount of information including details of exactly when physical structures started to emerge in the universe: the so-called ‘epoch of reionisation’.

However, before the telescope can be built a number of engineering challenges need to be overcome.

‘The UK is taking a leading part in the whole project,’ said Alexander. ‘We are looking at SKA as being both a huge engineering and IT problem.’

One of the study’s biggest challenges will be processing the large amounts of data that will be collected.

Alexander estimated that the data rates from a 1m 2 section of the telescope could be as high as one terabit per second, with all the signals needing to be processed across the extent of the telescope.

‘It raises all sorts of problems such as how you distribute this massive computational power across a telescope more than 3,000km 2 in size, as it cannot simply be processed in one single processor,’ said Alexander. 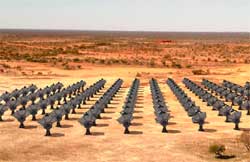 For SKA to achieve this the telescope will need to have as wide a view of the sky as possible — wider than any existing radio telescope — and be able to survey the sky at an extremely high rate.

The design is likely to include a mixture of aperture array receivers, which have no moving parts, along-side banks of conventional radio dishes that incorporate phased array receivers.

Phased array receivers are used in existing satellite communication systems but in SKA they will need to be both more efficient and have a much higher performance.

Each dish will be fitted with an array that acts like a radio camera, and a separate, much larger phased array at the centre of SKA will operate like a radio fish-eye lens to constantly monitor the sky.

The largest existing radio telescope is the Very Large Array (VLA) in New Mexico. Alexander expects that SKA will be around 100 times larger than the VLA. ‘We don’t want just to take the next incremental step from VLA,’ said Alexander.

‘We want to design a telescope for the 21st century that will allow us to tackle new problems which are out of the reach of existing telescopes.’

The EU has awarded around 27 per cent of the total N 38m (£21m) needed for the four-year study, which will involve eight European countries. It is hoped that the telescope will be completed by 2020.

Eyes for the OWL

Stars in his eyes