Researchers at the University of Wollongong in Australia are investigating whether sticky tape might prove a cheaper alternative to lasers as emitters of terahertz radiation, also known as T-rays.

The University of Wollongong's Prof Lewis said that peeling sticky tape gives off many forms of radiation, including visible light. 'You can see this for yourself in a dark room as you wait until your eyes are dark-adapted,' he added.

'Peeling sticky tape has already been known to produce X-rays, but we wanted to see if it could produce lower-frequency terahertz radiation. We were rather pleasantly surprised to obtain a clear signal in our first attempt,' said Lewis' colleague Dr Joseph Horvat.

Strongly adhesive Scotch Magic tape and weakly adhesive electrical tape both produced strong signals in the 0.1 to 10 terahertz range, but only about a microwatt of power.

The two researchers and their students will be making refinements to the apparatus in order to increase the output of their T-ray source.

T-rays penetrate common packaging materials such as paper and plastic and may find many applications in security screening, medical imaging and secure local wireless communications systems. 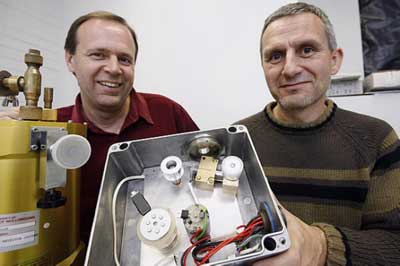 Prof Roger Lewis (left) and Dr Joseph Horvat hold up a device for unwinding sticky tape in a controlled way. The bolometer to the left (gold coloured) detects the T-rays

T-rays could probe materials at unprecedented level of detail