Chinese researchers have developed a stretchable metal-polymer conductor (MPC) that has potential for wearable circuits and biocompatible electronics.

The non-toxic material features globs of gallium and indium that sit within a silicon-based polymer substrate, the liquid metal acting as a fluid conductive medium that allows electricity to flow. According to the researchers, the structure resembles round liquid metal islands floating in a sea of polymer, supported by a liquid metal base to ensure full conductivity.

The material is produced using a combination of screen printing and microfluidic patterning, resulting in a pliable and resilient liquid-plastic hybrid that can take on a range of two-dimensional shapes. Described in new journal iScience, the MPC could facilitate advances in wearable electronics and durable biomedical implants.

"These are the first flexible electronics that are at once highly conductive and stretchable, fully biocompatible, and able to be fabricated conveniently across size scales with micro-feature precision," said senior author Xingyu Jiang, a professor at China’s National Centre for Nanoscience and Technology. "We believe that they will have broad applications for both wearable electronics and implantable devices."

As part of their research, the team experimented with a number of different MPC formulations in a variety of applications, including in sensors for wearable keyboard gloves and as electrodes for stimulating the passage of DNA through the membranes of live cells. Due to the flexibility of the method, it is claimed that virtually any two-dimensional geometry can be fabricated. 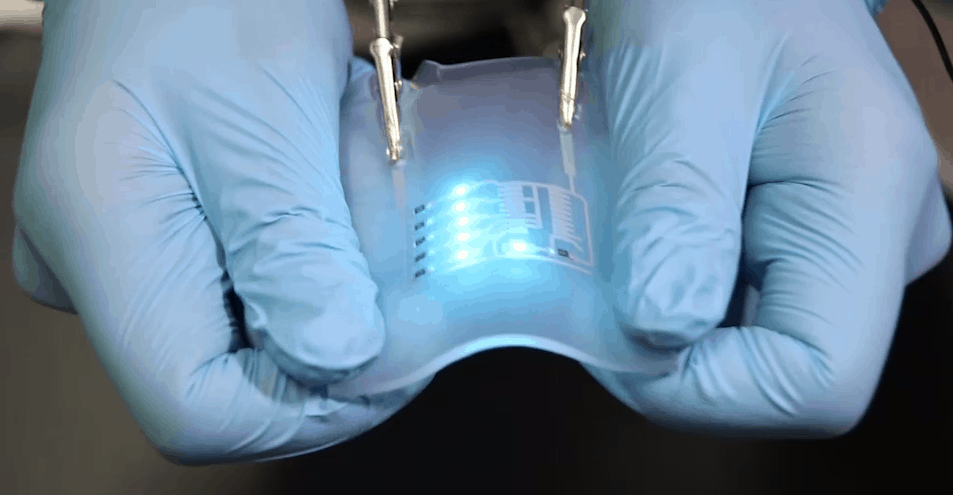 "The applications of the MPC depend on the polymers," said first author Lixue Tang, a graduate student in Jiang's research group. "We cast super-elastic polymers to make MPCs for stretchable circuits. We use biocompatible and biodegradable polymers when we want MPCs for implantable devices. In the future, we could even build soft robots by combining electroactive polymers."

According to project lead Jiang, biocompatibility was a fundamental requirement, and it opens up a world of applications beyond rudimental wearables.

"We wanted to develop biocompatible materials that could be used to build wearable or implantable devices for diagnosing and treating disease without compromising quality of life,” he said.  “We believe that this is a first step toward changing the way that cardiovascular diseases and other afflictions are managed."