A submarine rescue submersible commissioned by the Republic of Korea Navy has been fitted with a nose-cone shield produced by British firm, Talbot Designs.

A submarine rescue submersible commissioned by the Republic of Korea Navy has been fitted with a nose-cone shield produced by London-based firm, Talbot Designs, a bespoke plastic fabricator based in north London.

The high-cost, pressure-rated acrylic view-port at the front of the rescue submersible needed to be protected from accidental damage during routine use.

Talbot Designs was commissioned by James Fisher Defence (JFD), based in Renfrew, Scotland, which designed, manufactured and commissioned the rescue submersible, to provide a sacrificial lens cover to protect the front view-port, which it then manufactured to fit the complex contours of the submersible rescue vehicle.

If damaged, the non-pressure-rated protective cover can readily be replaced quickly, easily and relatively inexpensively.

'The view-port protection on our earlier designs were generally simple hemispheres, but our shape evolved to incorporate cut-outs to avoid interruption to the light beams, so that the lights could be tucked in closer to the hull for improved hydrostatics.

'We also required more shape in the lower part of the view-port protect to give a seamless fixing onto the rescue submersible front fairing and allow for movement of the forward collision structure.' 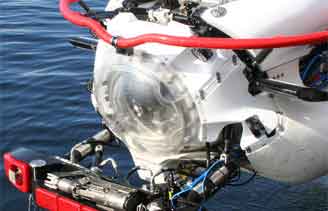 After consultation with Talbot Designs’ senior management team, it was agreed that a two-parts lens assembly was the best option.

The centre section was blown from optically-superior cast acrylic and the outer surround was vacuum–formed from high-strength 8mm PETG.

Gibson added: 'The two components fitted together with quick release bolts, which also meant that no cut-outs had to be made in the view-port protect to enable cleaning of the view port because the lens could simply be removed.'

The Korean Navy Deep Search And Rescue submersible was supplied by JFD and was named ROKS-DSRV II at a formal ceremony on 25 September at Fairlie Quay, Ayrshire, Scotland.

Talbot Designs also produced one of the pieces of acrylic technical equipment for the Large Hadron Collider at CERN.