The surface texture of gallium nitride materials can influence the health of nearby cells, a discovery that could influence the development of devices that control cellular behaviour. 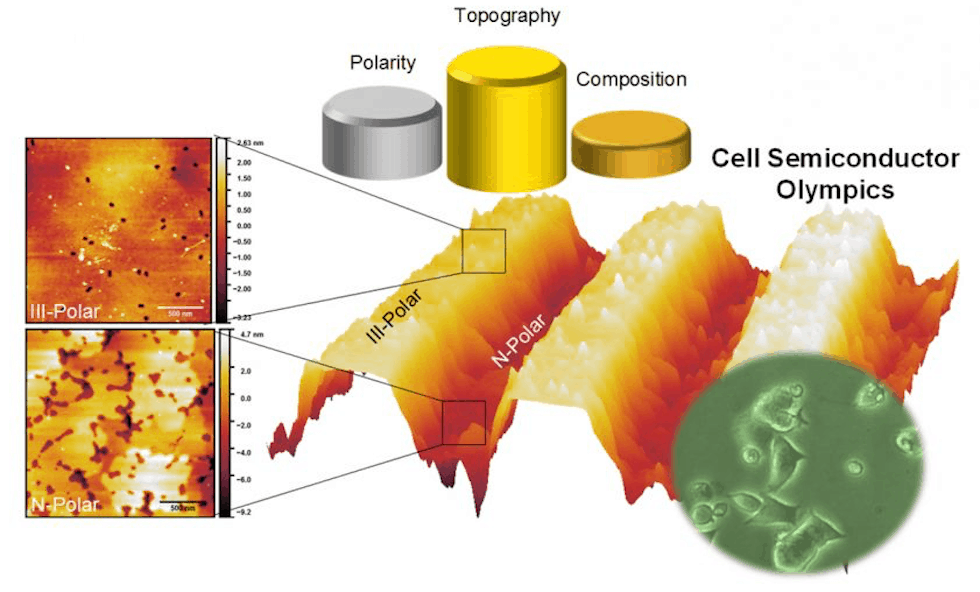 According to a team at North Carolina State University, gallium nitride (GaN) materials have a unique suite of properties that make them viable candidates for bioelectronic devices. This is because it is possible to tune the charge on the surface of the materials; the materials don’t easily degrade in aqueous environments like the body; and they are nontoxic.

“But while living cells will survive in the presence of GaN, we wanted to know if we could influence the behaviour of the cells by changing the make-up of the GaN material,” said Patrick Snyder, a Ph.D. student at NC State and lead author of a paper on the work. “Basically, we wanted to know if engineering the GaN could influence the health and metabolism of the surrounding cells.”

The researchers then used the various GaN materials as substrates for growing PC12 cells, which is a line of model cells that are well understood.

During the seven-day experiment, the researchers monitored the cell cultures to track the health and metabolism of the cells.

“We found that the roughly-textured AlGaN compositions released more gallium into the cellular environment,” Snyder said in a statement. “While this did not kill the cells, it did cause metabolic changes.”

“This tells us that the topography of the material matters, and can influence cellular behaviour,” said Albena Ivanisevic, a professor of materials science and engineering at NC State and co-author of the paper. “The work demonstrates that surface textures of bulk materials – like those used to create devices – can have similar effects to what we’ve previously seen in nanoscale materials.”

Hydrogen production given an edge by molybdenum sulphide

Biofuel cell can match the performance of platinum