Some of The Engineer's key commercial partners offer their take on the trends and technologies that will shape industry over the coming months in the publication's Tech Trends 2020 supplement. 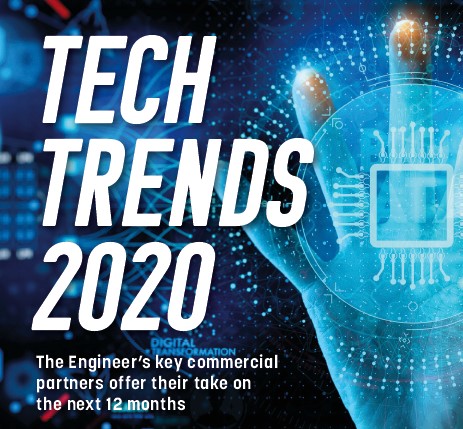 From driverless cars to the smart factory of the future, regular readers will find plenty of familiar themes in this year's supplement But perhaps the main “take-home” point is the degree to which these disruptive and once-fringe technologies are entering industry’s mainstream thinking.

A case in point is the driverless car. We’ve been talking about the technology’s inexorable rise for year now, but in many senses autonomous vehicles have already hit the mainstream in the form of the increasingly sophisticated advanced driver assistance systems (ADAS)  that are now commonplace on most new vehicles.  The emergence of these technologies, which range from automatic lane-keeping systems, to smart cruise control technology and even autonomous parking systems are increasingly are key steps on the path to full autonomy and evidence that many of the technical challenges presented by the vision of autonomous driving have already been overcome.

Whilst the major automotive OEMs grab most of the “driverless car” headlines, many of the key advances are made further down the supply chain. And in this issue we hear (page 8) from AVL, one of the key players in the development of a key underpinning technology for autonomous vehicles – the software.

Elsewhere (page 6) we turn to another perennial favourite: the digital factory of the future, and get a look inside the pristine high tech facility of  SICK’s sensor factory in Hochdorf near the German Black Forest. Industry 4.0 has tended to be heavy on vision and light on detail, but Sick gives us a tangible example of how it’s put the concept into practice to build a flexible manufacturing operation able to cope with jobs lots ranging from one to one million.

Staying on the digital theme, our friends at Dassault Systemes (page 8) illustrate how digitalization isn’t just restricted to the factory floor, but is also helping to reshape the airport of the future.

Dassault also offers some insights into how some of the world’s most sophisticated airports are acting as innovation incubators  and in some cases helping the aviation sector plan for services that don’t  even exist yet, such as ride sharing and autonomous vehicle corridors.

Indeed, the notion of future proofing today’s technologies from tomorrow’s emerging challenges is a recurring thread in this years’ report.

This has long been a particular challenge for the defence sector, where projects can take years to plan and years to come to fruition. Indeed, in the past it’s not been unusual for some defence technologies to be obsolete almost from the second they are introduced. But this is now changing.

In response to a rapidly evolving technology climate, and the emergence of an ever greater range of threats – defence firms are having to become more nimble in the way they innovate. And there are perhaps few more striking examples of this than project Tempest, which is developing The RAF’s future fighter aircraft.

In this issue we hear from Norman Bone, Managing Director of Leonardo (page 10)   one of main industry partners on Tempest - about the mind-boggling challenge of developing an aircraft to deal with threats that we haven’t even predicted !

From electrification and autonomy to ongoing digitalization, the perspectives offered by the companies contributing to this special, provide a compelling overview of some of the technological trends that will help shape our world in the months ahead.

But if we have to identify one subject that will perhaps loom larger than any others as we look at the next 12 months, then it’s a challenge that’s actually common to all of these areas: the need to nurture and tap into the skills that are required to truly capitalise on all of these fascinating technology areas.

As The Engineer has frequently noted, the role of the engineer is changing. The age of being able to quietly get on with things in your own silo are vanishing fast, and the ways in which industry and the engineering education landscape adapt to this challenge will perhaps shape industry more than any other factor in the year ahead.

Tech Trends 2019 - the engineering year ahead