The radio telescope network - dubbed e-MERLIN - is designed to help researchers create detailed radio images of stars and galaxies, using seven telescopes spread up to 217km apart across the .

The radio signals collected by the telescopes are brought back to Jodrell Bank using 600km of high-speed optical fibre cables laid by Fujitsu UK and operated by Global Crossing.

Professor Simon Garrington, director of e-MERLIN, said: 'The new optical fibre network, together with new electronics at each telescope and a powerful new correlator - a special-purpose computer built by Dominion Radio Astrophysical Observatory (DRAO) in Penticton, Canada - combine the signals at Jodrell Bank, making the telescope one of the most powerful in the world.

'The e-MERLIN fibre network will carry as much data as the rest of the UK internet combined, enabling astronomers to see in a single day what would have previously taken us three years of observations.'

Following a call for proposals that was answered by 325 astronomers from more than 100 institutes in more than 20 countries, the first major scientific legacy projects to be carried out by e-MERLIN have now been decided.

They include the study of star birth and death in our own galaxy and, looking back in time, in very distant galaxies, investigating the regions around supermassive black holes at the hearts of galaxies, tracking pulsars (the collapsed cores of exploded stars) and searching for ng planets forming around nearby stars. 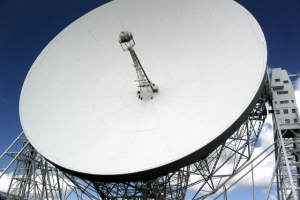 Heart on the sleeve