A small California aerospace company has unveiled a new suborbital spaceship that will provide affordable front-seat rides to the edge of space.

The company, XCOR Aerospace, of Mojave, California, says that its two-seat Lynx suborbital spaceship will carry people or payloads to where they will experience weightlessness and see the stars above and the Earth and its atmosphere below.

The spaceship, roughly the size of a small private airplane and powered by liquid fuel engines, will first take off in 2010 and will be capable of flying several times each day.

In December last year, the company, together with Alliant Techsystems, completed tests on a methane-burning rocket engine for NASA. The 7,500lbf thrust liquid oxygen (LOX)/liquid methane (LCH4) engine is being used to develop and refine methane rocket technology for possible use on lunar expeditions. Methane offers higher performance relative to other storable propellants, is less expensive to handle because of its lower toxicity, and is easier to store long-term than liquid hydrogen. 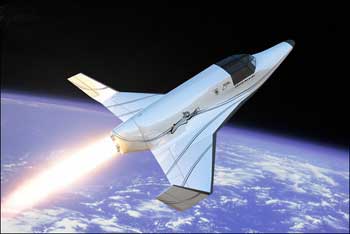 An artist's impression of the Lynx spaceship

The final frontier is participation