With the EU’s Energy Performance Directive due to come into force in January, engineers are looking attechnologies that can minimise the use of energy for systems within buildings.

Environmental technologies are now well-entrenched in most branches of industry, with a vast array of devices designed to cut electricity generation and improve energy efficiency.

But one of the largest power users are the lighting, heating and ventilation systems used by buildings themselves. The building sector is now showing an increased interest in technologies which can reduce this power consumption.

This interest is being fuelled by the European Commission, with the EU’s Energy Performance Directive due to come into force in January 2006. Designed to minimise the use of energy for systems within buildings, the directive requires heating, cooling and ventilation systems ‘to be designed and built so that the energy required in use will be low’. The energy usage will be subject to inspection and certification.

Much of the research on heating systems focuses on combining heating with power generation, in a domestic version of combined heat and power (CHP) generation, according to Doug Harris, a specialist in environmental building techniques at Heriot-Watt University’s department of building, engineering and surveying.

‘For large buildings, the technology for this has been in existence for some time, but systems are now appearing for domestic-scale installations,’ he said.

The most promising technology for this is based on Stirling engines, which heat and cool a sealed volume of a pressurised working gas — usually air, nitrogen or helium — so that it expands and contracts to move a piston up and down. Heat exchangers at either end of the system carry the heat in and out.

In a ‘micro-CHP’ setting, the heat is provided by burning natural gas, and waste heat removed from the ‘cold end’ is used to provide heating for the building.

Stirling engines were originally invented in the early 19th century, but there are technical problems with their construction which have prevented their largescale take-up.

For example, there is a delicate balancing act between minimising the volume of the heat exchangers, so the system is compact enough to be useful, but maximising the heat exchange surface area; there is a tendency for thermal fatigue, because of the continuous heating and cooling cycles; and they cannot be oil lubricated, because the high temperatures tend to degrade lube oils and cause coking.

Advantages include electrical generation efficiency of 15–25 per cent, with a unit around the size of a dishwasher producing up to 3kW. 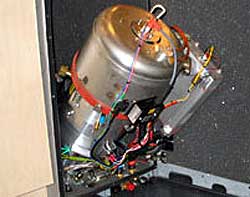 The WhisperGen is a co-generation (heat and power) system based on a small four cylinder Stirling engine.

Use of Stirling engines is now becoming more widespread. New Zealand company Whisper Tech, for instance, signed a NZ$300m (£117m) deal with PowerGen last year to fit its domestic WhisperGen units in the UK, with the largest installation to date being a 550-home development in Manchester.

When constructing environmental buildings, it’s important not to neglect the human factor. Buildings don’t exist in isolation — their occupants can have a significant impact on several factors, such as the temperature, air movement, humidity, carbon dioxide concentrations and odours. Air conditioning systems have the task of keeping these conditions constant.

In the UK’s frequently chilly environment, it might seem like air conditioning is a luxury. However, Harris pointed out that air cooling is only one function of the system. ‘It’s true that for most of the year, cooling isn’t a problem for UK buildings,’ he said. ‘But it’s very important for ventilation, to prevent the build-up of moisture. You need to change a minimum of half the air in a building every hour.

'There has been research in Sweden with lower-energy systems that change a smaller amount, which established that at anything lower than a quarter of an air-change per hour, you get problems with mould growing.’

Moving large volumes of air can require a large amount of energy. If the system is to be supplemented by natural ventilation, there are a new set of problems to contend with. Air-flow conditions are rarely constant — there are draughts, the air is warmed by the sun through windows, which creates convection currents and layers of warm and cool air. However, careful design can incorporate all of these phenomena into the system. Computational fluid dynamics (CFD) software is proving useful to see how the design of a building affects the occupants, and vice-versa.

At De Montfort University in Leicester, Dusan Fiala is working on a CFD system which combines a simulation of the airflow through a building with a mathematical model of the physiology of the human body. Each person is surrounded by a buoyant plume of warm air and moisture, said Fiala, and the heat and water exchange phenomena between this plume and the surrounding air are extremely complex.

He said that the research will help put ‘the human factor’ at the centre of design, as well as pushing the predictive capability of CFD as a design tool. The applications of the technique are not confined to building, he said; they can be used for any system where the comfort of people is a factor — such as the design of cars, trains and aircraft. There are also likely to be applications in modelling the air quality and circulation in hospitals, as part of the prevention of the spread of airborne infections.

German researchers are also looking at these technologies, with the Fraunhofer Institute for Building Physics near Munich constructing a three-storey test building, called the VERU. Equipped with some 250 sensors to detect energy flows, light intensities, and the humidity, speed and temperature of air flows, VERU can be reconfigured internally to test the effect of different systems of heating and variable blinds. ‘We primarily examine the effects of different façade systems and service installations on the atmosphere in the rooms,’ said deputy department head, Herbert Sinnesbichler.

According to Harris, natural ventilation is usually used in conjunction with the heavier types of construction materials, such as stone and concrete. these have a higher heat capacity and help to soak up excess heat from the interior of the building.

However, new materials are being developed which show the same properties, but at a fraction of the weight, bulk and cost. Known as phase-change materials, these are likely to be the focus of much research in the coming years, said Harris.

This new generation of materials takes a more active role in keeping the indoor temperature at a comfortable level without using energy. For example, German chemicals giant BASF has developed a plasterboard called Micronal, where the gypsum that makes up the plaster is mixed with a waxy material encapsulated inside microscopic capsules of an impervious polymer.

This cycle helps to keep buildings warm by day and cool by night, without the need for any heating or air conditioning system. According to BASF, 15mm-thick Micronal boards have the same heat storage capability as a 90mm-thick concrete wall.

Heat of the moment