A collaboration between Cambridge University and the Massachusetts Institute of Technology has led to the development of a tissue scaffold that can stimulate bone and cartilage growth when transplanted into the knees and other joints.

A collaboration between Cambridge University and the Massachusetts Institute of Technology (MIT) has led to the development of a tissue scaffold that can stimulate bone and cartilage growth when transplanted into the knees and other joints.

The scaffold could offer a potential treatment for sports injuries and other cartilage damage, such as arthritis.

'If someone had a damaged region in the cartilage, you could remove the cartilage and the bone below it and put our scaffold in the hole,' said Lorna Gibson, a professor of materials science and engineering at MIT and a member of the team that developed the scaffold, working with Prof William Bonfield at Cambridge.

The scaffold technology has been licensed to Orthomimetics, a British company launched by one of Gibson's collaborators, Andrew Lynn of Cambridge University. The company recently received approval to start clinical trials in Europe.

The scaffold has two layers - one that mimics bone and one that mimics cartilage. When implanted into a joint, the scaffold can stimulate mesenchymal stem cells in the bone marrow to produce new bone and cartilage. The technology is currently limited to small defects, using scaffolds roughly 8mm in diameter.

The researchers demonstrated the scaffold's effectiveness in a 16-week study involving goats. In that study, the scaffold successfully stimulated bone and cartilage growth after being implanted in the goats' knees.

The project began when the team decided to build a scaffold for bone growth. They started with an existing method to produce a skin scaffold, made of collagen (from bovine tendon) and glycosaminoglycan, a long polysaccharide chain. To mimic the structure of bone, they developed a technique to mineralise the collagen scaffold by adding sources of calcium and phosphate.

Once that was done, the team decided to try to create a two-layer scaffold to regenerate both bone and cartilage (known as an osteochondral scaffold). Its method produces two layers with a gradual transition between the bone and cartilage layers.

'We tried to design it so it's similar to the transition in the body. That's one of the unique things about it,' said Gibson.

There are currently a few different ways to treat cartilage injuries, including: stimulating the bone marrow to release stem cells by drilling a hole through the cartilage into the bone; transplanting cartilage and the underlying bone from another, less highly loaded part of the joint; or removing cartilage cells from the body, stimulating them to grow in the laboratory and re-implanting them.

The scaffold could offer a more effective, less expensive, easier and less painful substitute for those therapies, said Gibson. 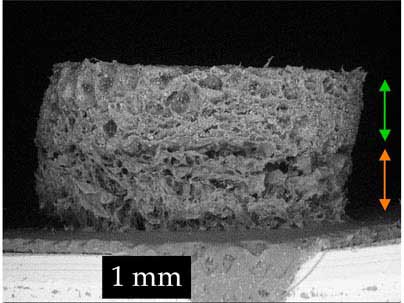 MIT and Cambridge University scientists developed this tissue scaffold that could help repair knees and other joints. The top section, indicated by the green arrow, stimulates bone growth, while the lower half, marked by the orange arrow, stimulates cartilage growth