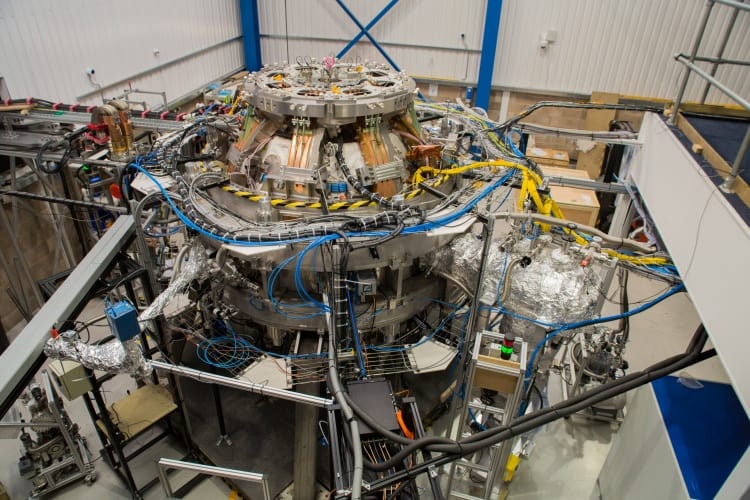 The milestone was achieved using the ST40 device, the latest in a line of tokamaks the company has built in pursuit of commercial fusion. Using a technique known as merging compression, the ST40 releases energy as rings of plasma that crash together and magnetic fields in the plasma reconfigure – a process known as magnetic reconnection.  Merging compression involves high electric currents running through the internal coils of the ST40, requiring power supplies to deliver thousands of amps in seconds. According to Tokamak Energy, it combines intricate electrical engineering processes that also place high demands on the mechanical engineering of the whole system.

“We are taking significant steps towards achieving fusion energy, doing so with the agility of a private venture, driven by the goal of achieving something that will have huge benefits worldwide,” said CEO Jonathan Carling.

“Reaching 15 million degrees is yet another indicator of the progress at Tokamak Energy and a further validation of our approach. Our aim is to make fusion energy a commercial reality by 2030. We view the journey as a series of engineering challenges, raising additional investment on reaching each new milestone.”

Though 15 million degrees may be an important landmark on the journey, it is a long way from the 100 million degrees required for thermonuclear fusion on Earth. The ST40 is the third machine in a five-stage plan that Tokamak Energy believes will lead to commercial fusion energy by the end of the next decade. Though it won’t be capable of energy gain – the holy grail of fusion – the ST40 is designed to reach the magic 100 million degree mark. Tokamak Energy will now be working towards that goal in a new facility with upgraded equipment.

“Fusion is a major challenge, but one that must be tackled. We believe that with collaboration, dedication and investment, fusion will be the best means of achieving deep decarbonisation of the global energy supply in the 2030s and beyond.”