Oxford University scientists have created a transparent form of aluminium by bombarding the metal with the world’s most powerful soft X-ray laser.

‘Transparent aluminium’ previously only existed in science fiction, featuring in the movie Star Trek IV, but the real material is an exotic new state of matter.

To make the material, an international team led by Oxford University scientists deployed a short pulse from the so-called FLASH laser in Hamburg, Germany, to ‘knock out’ a core electron from every aluminium atom in a sample without disrupting the metal’s crystalline structure. This turned the aluminium nearly invisible to extreme ultraviolet radiation.

'What we have created is a completely new state of matter nobody has seen before,’ said Prof Justin Wark of Oxford University’s Department of Physics.

The Oxford team focused the laser down into a spot with a diameter less than a twentieth of the width of a human hair. At such high intensities, the aluminium turned transparent.

While the invisible effect lasted for an extremely brief period - an estimated 40 femtoseconds - it demonstrated that such an exotic state of matter can be created using very high-power X-ray sources.

Wark added: ‘What is particularly remarkable about our experiment is that we have turned ordinary aluminium into this exotic new material in a single step by using this very powerful laser. For a brief period, the sample looks and behaves in every way like a new form of matter. In certain respects, the way it reacts is as though we had changed every aluminium atom into silicon.' 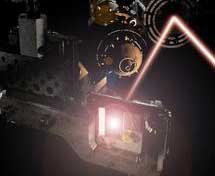