Cambridge medical technology firm CMR Surgical has unveiled a robotic system that it claims could lead to millions more patients benefitting from the advantages of minimally invasive surgery.

The so-called Versius system, which consists of individual cart-mounted robotic arms that are remotely operated by a surgeon, has been developed to perform a variety of surgical procedures from laparoscopic prostectomies to hernia repair.

Minimally invasive surgery has significant advantages over traditional open surgery including a reduced risk of infection and much faster recovery times and has inspired a number of robotic developments over the years including, most notably, the US developed Da Vinci system, which is now used in a number of hospitals around the UK.

However, owing to the size and cost of existing systems, application of the technology is limited and millions of procedures that could be performed using minimal access surgery are still carried out using open surgery techniques. 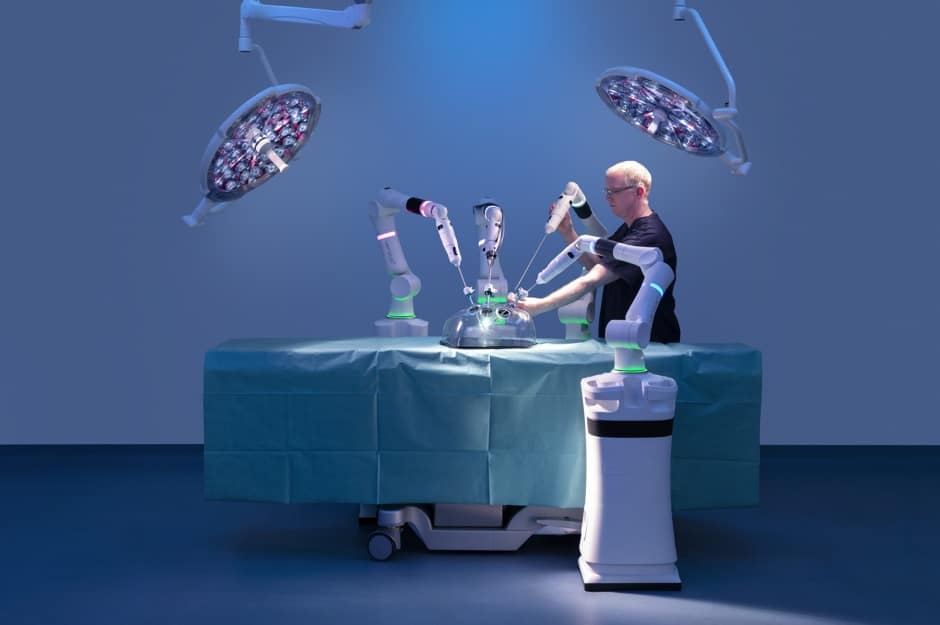 CMR’s CEO Martin Frost claims that thanks to its compact size and relatively low cost, Versius could transform the market for surgical robotics. “There are six million people a year who get open surgery,” he said. “That shouldn’t be necessary any more, but it is because minimally invasive surgery is hard to deliver. Versius is sufficiently versatile that it can help perform the vast majority of laparoscopic cases and do that in a way that fits naturally into the operating room, is easy to work with and does it all at an affordable price.”

The technology has enthusiastic support from a number of surgeons, including urology surgeon and chairman of Kings College London’s Institute of Robotic Surgery Professor Prokar Dasgupta. “I think Versius will change the way surgeons practice,” he said. “There’s a high chance it will democratise surgery because it will be cheaper……today only 5 – 10 per cent of operations worldwide are robotic. Versius has the potential to change that. I’m excited that at last we have a British robot!”

Henry Tilney a Colorectal surgeon at Frimley Park Hospital in Surrey added that one of the key attractions of the system is the ease with which it can be deployed. “It’s a lot more portable than existing systems,” he said. “It’s modular so arms can be used as and when necessary….and there wouldn’t be the need in a hospital that’s adopting robotic surgery to have a dedicated robotic theatre which is what we currently have to use.”

Founded in 2014, CMR now employs over 220 people and recently announced a record-breaking private fundraising round of $100m.

The company is currently undergoing validation studies for regulatory approval processes in Europe and claims that the system will make its debut in UK and European hospitals as soon as next year.