A programme backed by the US Navy is exploring the use of electromagnetism to create a water cloak that would diminish a vessel’s wake and drag. 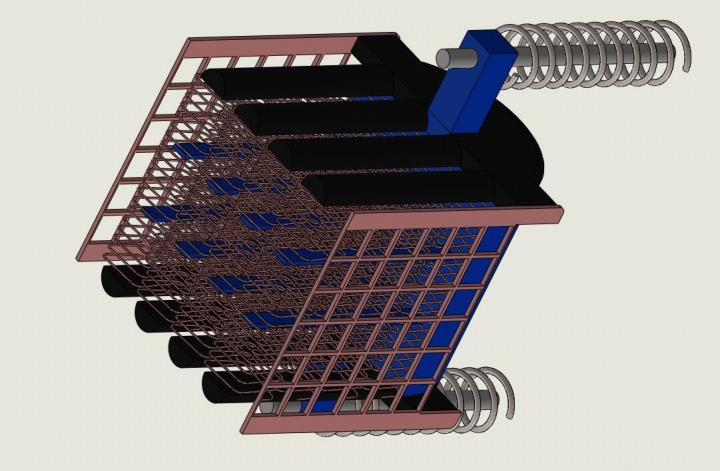 A schematic for a prototype of the proposed water cloaking device (Credit: Yaroslav Urzhumov/Duke University)

The concept was first developed at Duke University in 2011, and in theory works by matching the acceleration of the surrounding water to an object's movement. This would not only increase propulsion efficiency, it would also leave the water around the object largely undisturbed. While the original concept relied on a complex system of small pumps to create the water cloak, today’s version instead uses electromagnetic fields created by wires and coils to move the charged particles found in seawater. The work is described in the journal Physical Review E.

“There are many ways to reduce wake and drag, like surrounding an object with low-friction bubbles, which is actually done with some naval torpedoes," said Yaroslav Urzhumov, adjunct assistant professor of electrical and computer engineering at Duke.

"But there's only so much you can do if you're just applying forces at the surface. This cloaking idea opens a new dimension to create forces around an underwater vessel or object, which is absolutely required to achieve full wake cancellation."

When a charged particle travels through an electromagnetic field, the field creates a force on the particle. Because seawater has an abundance of ions like sodium, potassium and magnesium, there is an abundance of charged particles available to push. Using magnetohydrodynamic simulations, Urzhumov and his colleagues demonstrated that controlling the velocity and direction of the water around an object creates the appearance that the water inside the cloak is completely stagnant in relation to the surrounding sea.

One drawback, however, is the huge energy requirements of the system. According to Urzhumov, a ship or submarine deploying the device would need to be powered by a nuclear reactor. Nonetheless, he believes the water cloak technology will find future applications.

"The original idea was so big that it enticed colleagues at the Naval Undersea Warfare Centre to help us pursue it, even though they were incredibly sceptical," said Urzhumov, who was also involved in the original 2011 paper. "Since then, we have identified a path to materialising this seemingly impossible proposal."