Green Ocean Energy has developed a wave power machine that attaches to an offshore wind turbine to provide combined wind and wave power.

The company developed its Wave Treader technology after securing £60,000 of funding from npower's Juice fund - a unique scheme that supports the development of wave and tidal technology.

The Wave Treader concept uses two sponsons that rise and fall as waves pass. The motion of the sponsons power a hydraulic cylinder that pressurises hydraulic fluid, which is then smoothed by hydraulic accumulators before driving a hydraulic motor, which in turn drives an electricity generator. The electricity is then exported through the cable shared with the wind turbine.

Periodically, the structure of the device moves vertically to allow for the effects of tidal range, and it can also rotate to ensure that the sponsons are optimally aligned with the wave direction.

The Wave Treader, a derivative of an earlier machine the company developed called the Ocean Treader, has already achieved proof of concept and a full size prototype could be ready for testing in 2010. Potentially, each Wave Treader machine could generate 500kW - enough electricity to power 125 homes.

Managing director of Green Ocean Energy, George Smith, said: 'We have drawn on our extensive skills and experience in the energy sector to develop this technology. These are exciting times for the company and we look forward to seeing the device incorporated into offshore wind farms.' 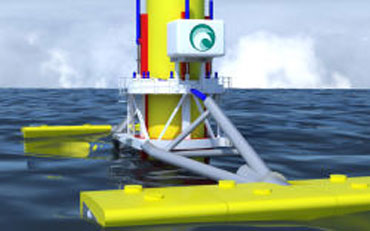 npower invests £10 per year, per customer into its Juice fund. To date, the fund has invested £2m into the development of marine renewable energy projects such as Green Ocean Energy's Wave Treader