A team at Cranfield University developing tiny aircraft that fly using an insect-like flapping motion is to build a demonstrator with controllable wings.

The team, led by Dr Rafal Zbikowski of the university’s Defence Academy Shrivenham, has attracted the attention of the US military for its work on micro air vehicles (MAVs), which could be used for indoor reconnaissance in urban warfare or counter-terrorism missions.

The research team has previously built non-flying prototype MAVs, but these had wings that were only able to flap in one direction. This fixed motion made them good for hovering, but for the aircraft to manoeuvre each wing must be modified individually, said Zbikowski.

The researchers will be able to control the movement of the demonstrator’s wings while they are flapping, he said. ‘This is useful because manoeuvres are produced by asymmetries in flapping, or when the right wing does something slightly different from the left wing.’

To flap, the wings will use electromechanical resonance, in which a system is set to vibrate at its own natural frequency. Insects use resonance for flapping because it is highly efficient; as with a pendulum, in an environment free of friction or drag, the device would continue in perpetual motion once started.

The 150mm demonstrator will use two sets of actuators: a main driving one feeding the resonance, and miniature piezoelectric actuators at the root of each wing to control the motion.

‘It’s a little bit like a car, where you have a main engine to drive the wheels and a steering wheel to modify the motion,’ said Zbikowski. 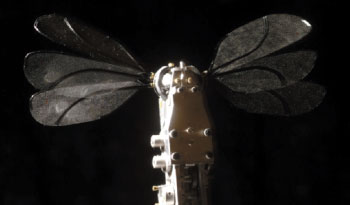 As with previous test devices, the new demonstrator will not actually fly. But it is the first test device the team has designed with specific requirements of flight in mind; hence it will be lightweight, and the actuators will be an integral part of the mechanical structure, making the device more compact.

Zbikowski said the demonstrator ‘will be the heart of the future flying platform, so it will have the wings, driving mechanism and the actuators, even though it won’t fly.

‘The main reason for this is that to have something in the air is not actually that difficult; the issue is controlled flight, and we still don’t properly understand the dynamics and control of insect flight.’

Zbikowski, whose team is working with colleagues at Bristol University, is planning a complementary project to investigate insect flight.

He expects to have built a flying demonstrator within the next 10 years, and a commercial system soon after. The MAVs could also be used in civilian applications for carrying out inspections in confined spaces such as machine rooms on ships or large generators, and for search and rescue operations.

Research on the wing