A 700-tonne bridge-building machine today [May 31] set to work on building the railway’s first and longest viaduct as part of the HS2 high-speed rail project.

Stretching over two miles across a series of lakes and waterways between Hillingdon and the M25, the Colne Valley Viaduct will also be the longest railway bridge in the UK.

Known as a launching girder, the 160m long bridge-building machine is the only one of its kind in the UK and will be used to lift the concrete deck segments that form the viaduct’s arches into position. Once each section is complete, the machine will inch itself forward into position to build the next stage.

According to HS2 Ltd, 1,000 deck segments will be needed, each weighing up to 140 tonnes. To allow for the gentle curves of the viaduct as it crosses the valley, all the segments are slightly different shapes and made on site at a purpose-built temporary factory close to the north abutment. 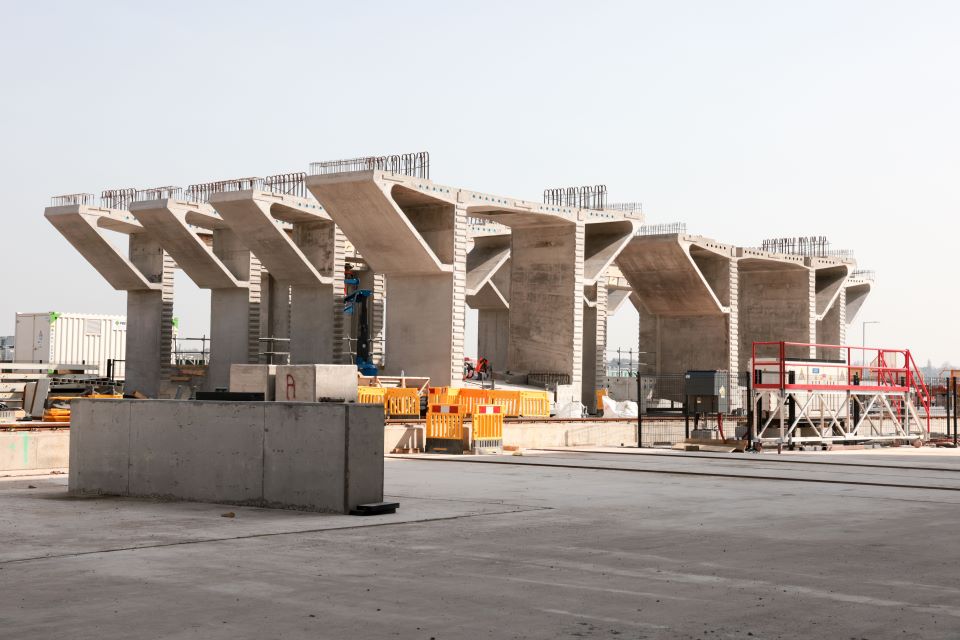 In a statement, HS2 Ltd chief executive Mark Thurston said: “I’m absolutely delighted that we have started work to assemble the giant deck segments that will form the Colne Valley Viaduct. It is yet another big milestone for HS2 Ltd, as we work to deliver the UK’s new high-speed railway. Once complete, this record-breaking structure will form a key part of the HS2 railway – helping to deliver better connections across the UK, free up rail capacity on the train network, and offer passengers a zero-carbon travel option.”

The viaduct project is being led by HS2’s main works contractor Align JV, a team made up of Bouygues Travaux Publics, Sir Robert McAlpine and VolkerFitzpatrick.

In total, 56 piers each weighing around 370 tonnes are being constructed along the Colne Valley ahead of the girder, with the girder moving from one pier to the next, installing the deck segments as it goes. One segment is put in place each side of the central pier, using a cantilever approach to balance the structure, as two half-arches either side of each pier are constructed simultaneously. Steel tensioning cables will be threaded through the segments to strengthen the bridge.

The viaduct pre-cast factory where the segments are made at the peak of construction will cast around 12 segments each week using match-casting. HS2 Ld said this approach will ensure the whole deck fits perfectly when assembled on the piers.

Once construction is complete, the factory and surrounding buildings will be removed and the whole area between the viaduct and the Chiltern tunnel will be transformed into an area of chalk grassland and woodland.

Align project director, Daniel Altier said: “The start of the erection of the deck segments marks the latest important milestone for Align, relating to the construction of the Colne Valley Viaduct. There has been a lot of hard work involved to get us to this point, and the achievements so far are a great example of what collaboration and excellent teamwork can deliver.”