Hydrogen has long been seen as the future of clean energy, but storing and transporting the gas safely and cost effectively remains a considerable challenge.

Now an integrated power supply unit that can convert formic acid into hydrogen fuel and use it to produce electricity has been developed by a European team.

Unlike hydrogen gas, which must be stored at very high pressures and low temperatures, formic acid is liquid at room temperature, and so could be easily transported to vehicle filling stations or remote locations. What’s more, just one litre of formic acid carries 590l of hydrogen.

The technology, developed by GRT Group, based in Swizerland, and researchers at École polytechnique fédérale de Lausanne (EPFL), consists of a hydrogen reformer, known as HYFORM, and a proton-exchange membrane fuel cell (PEMFC).

The reformer uses a ruthenium-based catalyst to convert formic acid into hydrogen, carbon dioxide and water. The carbon dioxide can then be absorbed, to prevent it being released into the atmosphere.

The HYFORM-PEMFC technology could allow large quantities of hydrogen to be stored without refrigerating or compressing it, according to Luca Dal Fabbro, chief executive officer of GRT Group.

“This would allow it to be used in places that would be impossible today, for example remote places such as villas in the mountains or hospitals in Africa, places where hydrogen compression is just not possible,” he said.

The HYFORM-PEMFC can produce 7000kWh yearly, and its nominal power is 800W, with an electrical efficiency of 45 per cent.

The unit is also low-maintenance, and the catalyst can be used for long periods. The researchers are also investigating the development of other catalysts based on even cheaper materials. 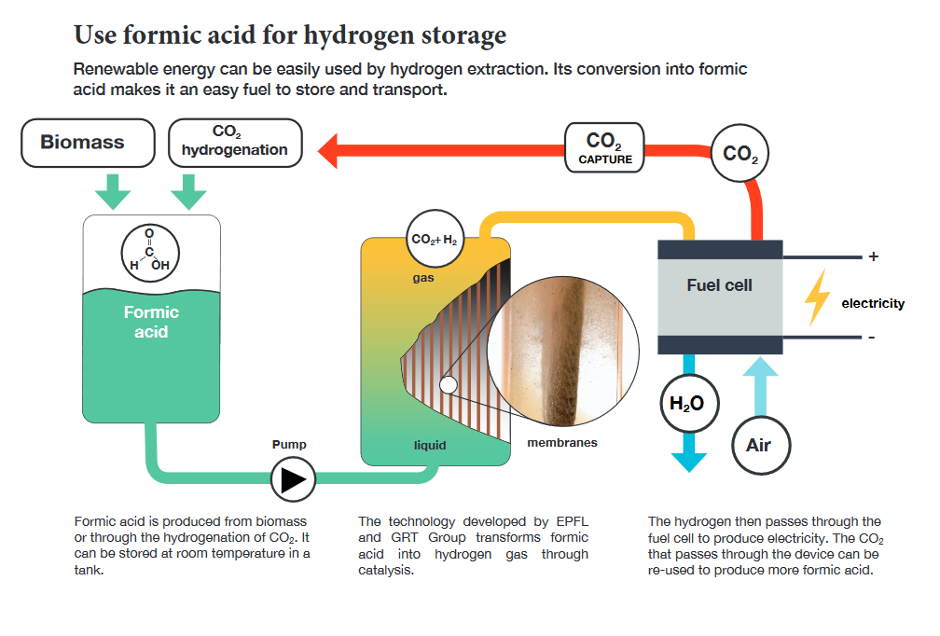 The technology is scalable, meaning it can be used in both households and industrial settings. It does not require connection to the power grid, making it suitable for remote or inaccessible areas.

GRT Group is also now hoping to develop the process so that it can operate in reverse, to produce formic acid from hydrogen, said Dal Fabbro. In this way it could be used to store excess energy generated from renewable sources, he said.

“Imagine a big wind farm in Scotland that produces energy when it is not required,” he said. “We are going to absorb that energy and transform it into formic acid, which could then be used when you need the energy.”