As one carrier nears completion, another prepares for sea trials

Guest BlogACA engineering directorDavid is employed by BAE Systems, and is responsible for all the engineering work being carried out on the QE Class programme. Previously, he was design manager for HMS Ocean, Albion and Bulwark, and was chief engineer on the Type 45 Destroyer programme.

It is now about a year since the naming ceremony and float out of Queen Elizabeth, and a great deal has happened in the development of the two aircraft carriers since then.

Queen Elizabeth is now well into the commissioning and completions programmes, with around 550 of the 3000 compartments on board now having passed through Compartment Completion Inspection and been locked up ready for handover to the Ship’s company.  The accepting authorities have been very pleased with the standards achieved at these inspections.  The bridge area has been handed over to the Mission System team and the installation of the processor cards and other electronic equipment is nearing completion which will allow the Integrated Navigation and Bridge System to be commissioned.  The Integrated system provides for a common look and feel across the systems in the bridge which will enable navigation of the ship with a leaner manning than would have been traditional.  Installation of the High Frequency communications processors in the radio rooms has also commenced. 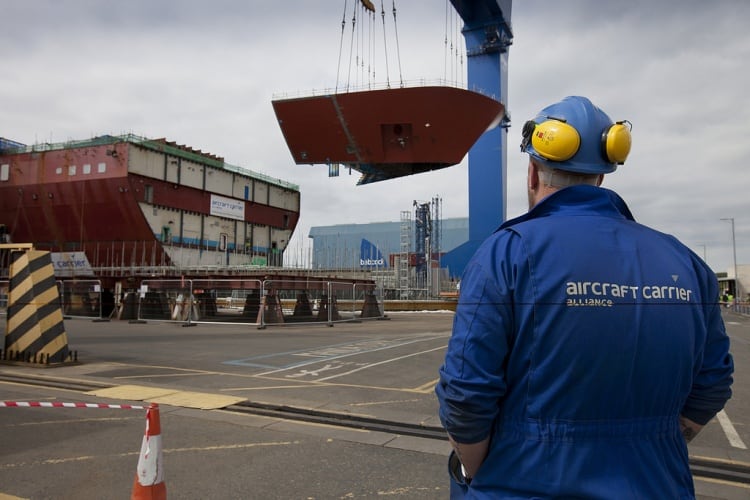 All four of the ship’s main diesel generators have now been run, which is a significant milestone for the project.  This now enables the power and propulsion team to progress through to commissioning the two gas turbines and moving on to commission the propulsion system.  The ship is connected to a very large high voltage load bank ashore and the ship is currently fitted with brake propeller blades which absorb shaft torque without producing thrust.  Through a combination of the load bank and the brake blades it will be possible to run the generation system up to its total 110 MW while the ship is afloat at the fitting out quay.  Off the ship a successful series of trials have been carried out using the second ship’s propeller boss to remove the brake blades and fit the propeller blades by divers working underwater.  This has proved the feasibility of the operation, mitigating a significant risk on the programme and validating the time allowed for within the programme. 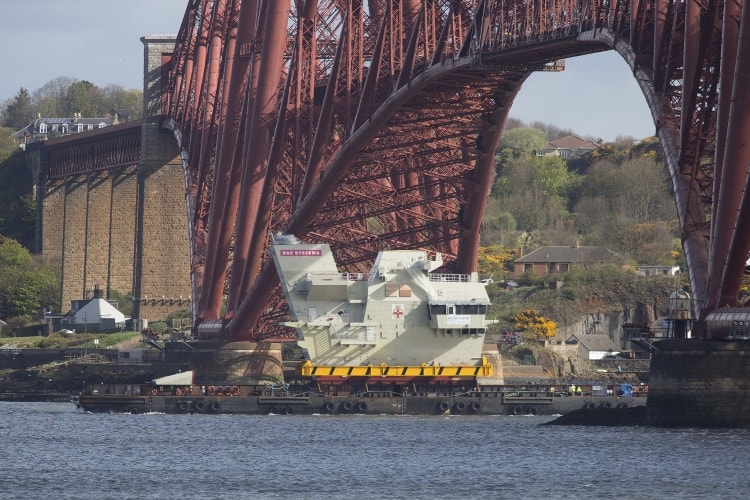 The Long Range Radar fitted atop the forward island has now started to be rotated and tracks recorded in the Operations Room.  Attention will shortly be turned to the Artisan Medium Range Radar which will be fitted to the aft island.  Factory Acceptance Testing is being carried out on the Isle of Wight in early August with the plan to install the radar and associated equipment onto the ship through September.   The Queen Elizabeth team are all committed to completing the outfit and commissioning handing it over to the ship’s company and enabling first of class flying trials to be carried out in late 2018.

Prince of Wales has also moved on a long way throughout the year, it is currently around 74% complete.  The forward half of the ship, including the forward island is now structurally complete in the build dock.  Indeed from the head of the dock it looks like a complete aircraft carrier which is quite remarkable considering that less than a year ago the dock was empty.  A mass of scaffolding has been constructed around the forward end of the ship and work has commenced in blasting the topsides and applying the top coats of paint. 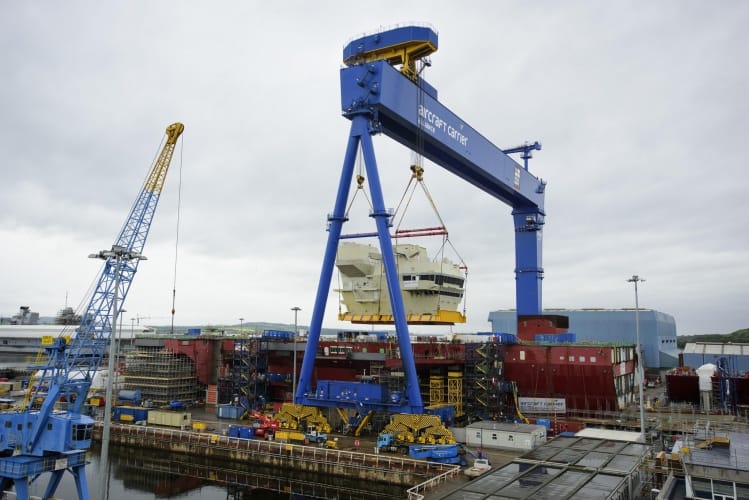 At the BAE Systems shipyard at Govan on the Clyde, Lower Block 04 the final large block making up the after part of the HMS Prince of Wales hull has been completed and rolled out of the build hall ready for load out onto the semi-submersible barge and transportation to the build dock at Rosyth. It is scheduled to arrive at Rosyth at the end of August, where it will be docked down and the whole of the front half of the ship hydraulically skidded back to meet it.  The final upper blocks are nearly ready for shipping from Cammell Laird’s shipyard at Birkenhead while the aft island and the very aft end of the ship, Lower Block 05, are nearing completion at Govan.  Remarkably the shipbuild work across the country will be complete by the end of the year with all the assembly and outfit activities taking place at Rosyth.  We now very clearly have two aircraft carriers at Rosyth. 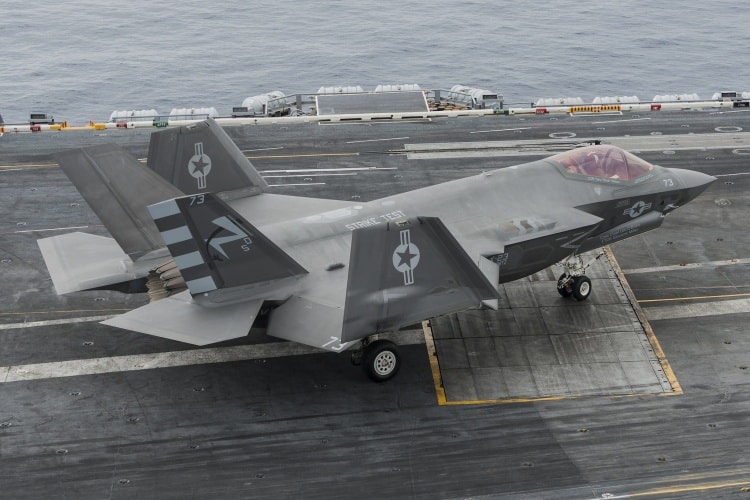 At Portsmouth around £100M of investment is being made on developing the infrastructure that will be required to make Portsmouth Naval Base the home port for the two carriers.  This includes dredging of Portsmouth harbour, modifications to the jetties and mooring arrangements, installation of high voltage shore electrical supplies and the provision of office space for the people needed to support the ships as they enter service and work up to full capability.  In addition work is going on between the Aircraft Carrier Alliance, the MoD and the Ship Support Alliance to ensure that the processes and procedures are in place that will enable the ships to seamlessly enter into service.

The US Marine Corps, following extensive flight trials with the STOVL F35B aircraft on USS Wasp, have declared Initial Operating Capability for their aircraft and the flight decks of the US ships are being recoated with heat resistant thermal metal spray to withstand the temperature of the F35 jet efflux.  This is a great step forward for aircraft ship interface and has significant read across to mitigating the risks of operating these aircraft from Queen Elizabeth and Prince of Wales.

A great deal has happened in the last year, and this time next year Queen Elizabeth’s ships company will be moving on-board in preparation for the start of sea trials.

Start of a momentous year for Carrier project