Freelance contributorWhile automation can undoubtedly make life easier and safer for humans, it presents some difficult tasks for the engineers developing the systems, says our former senior feature writer

Predicting the rise of technologies is a notoriously difficult thing to do. Thomas Watson a former IBM Chairman apparently once said ‘I think there is a world market for maybe five computers’. And certainly no one foresaw the impact of the internet.

But there are certain themes that seem to hold fast, and automation is one. Ever since the mechanisation of the textile loom we have seen humans take an increasingly supervisory role in many aspects of industry. It is inevitable.

It will have a profound impact on many aspects of society, increasing productivity, safety, and quality of life.

Robotics has been used in some industries for decades, particularly where precision is paramount, such as microprocessor fabrication. But thanks to advances in technology, industries in difficult and widely dispersed environments such as mining, oil drilling and agriculture are now ripe for automation.

Anglo-Australian miner Rio Tinto is currently working on its ‘Mine of the Future’ site in Western Australia, featuring driverless trucks to ferry the ore which ‘talk’ to each other communicating their location, speed and payload to coordinate their activities. The idea is that eventually vast open-pit mines will be devoid of humans, and be supervised at urban locations hundreds of kilometres away, with miners taking on an air-traffic controller-type role.

With oil companies drilling ever deeper offshore in the search for the black gold, the opportunity for things to go wrong increases as the Horizon incident proved. Underwater robots could help in constantly monitoring and maintaining wells and reacting to problems. A European research project dubbed PANDORA which gathers industry and academia is aiming to build truly intelligent autonomous underwater vehicles (AUVs) that can learn from their mistakes and adapt mid-mission. 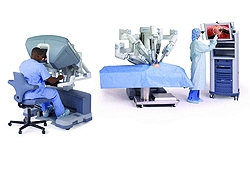 A key goal is autonomous wheelchairs that can navigate hospitals and other buildings and deal with obstacles.

That’s something a team at the School of Digital Arts and Engineering at Kent University is working on. They’re using a range of sensors along with some clever algorithms.

‘We want the system to be put in a new environment and learn about its surroundings as well as be able to map itself in a known environment,’ said Dr Gareth Howells of Kent.

A key aspect of the wheelchair is that it has customisable levels of autonomy.

A skin-mounted electronic radio-frequency identification (RFID) ‘tattoo’ which contains data about an individual will communicate to the wheelchair what level of autonomy the patient requires based on his or her level of disability.

‘If there is a profile for that patient, the chair could automatically realise that, and say “OK, this patient can steer to some extent but is likely to get tired after a certain time” or “this patient is totally immobile and therefore needs total autonomy”,’ said Dr John Batchelor who is another member of the team. ‘If you want to rehabilitate the patient you might want to start them off with a chair that’s very autonomous but that slowly gives more and more control over time.’

There is also a broad range of robotics technologies being developed for the benefit of society at large.

Unmanned Aerial Vehicles (UAV) better known as ‘drones’ have become infamous for their targeted strikes as part of US military campaigns.

But there could be a huge market for civilian applications in security surveillance (both private and police), disaster zone reconnaissance, crop management and environmental monitoring to name but a few.

However, currently UAVs above a certain size are not permitted to fly in civilian airspace. 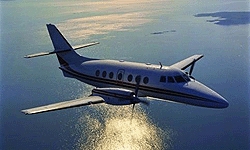 ‘You can’t fly UAVs in non-segregated airspace, they have to be in their own cleared piece of airspace with everybody else excluded because of the difficulties of preventing them from bashing into other people, for example,’ said Richard Bourne programme manager of research and technology at Cobham Mission Equipment, which works on the technology.

Developers will have to convince regulators that these UAVs can be autonomous and react to emergencies – something their military cousins don’t have to do, since they are basically remotely operated from the ground.

’The classic one is sense and avoid - the pilot’s responsibility to look out of the window and make sure he doesn’t drive into anything. You’ve got to emulate that capability,’ Bourne said.

One area of automation that will perhaps have a greater impact on everyday consumers is self-driving cars.

It’s an idea that’s probably as old as the motor car itself — but the integration of various sensor technologies has brought it within grasp.

The state of California made headlines in September 2012 when it signed a bill to establish safety and performance regulations to test and operate ‘driverless’ vehicles on roads across the state.

It was pushed by internet giant Google, which has been testing a fleet of 12 autonomous computer-controlled vehicles for several years.

Packed to the teeth with technology such as lidar (radar that uses light pulses) the cars can negotiate pretty much any road configuration or hazard, even edging forward at some junctions to signal their intentions.

However, that is far too expensive an option for most car makers, and in truth most drivers will be reluctant to completely relinquish control even if it is safer.

Two options that we could see however are pedestrian detection and emergency systems (Volvo already has an early version); and platooning for motorways.

Vehicle platooning involves a line of multiple vehicles led by a professional driver, where each car measures the distance, speed and direction, adjusting to the car in front. Once in the platoon, drivers can relax and do other things while the platoon proceeds towards its long-haul destination and vehicles can leave the procession at any time. 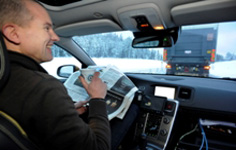 Platooning also reduces air resistance and fuel consumption and since the vehicles travel with only a few metres gap, it may also relieve traffic congestion.

In this way the car essentially becomes like a robot, making the critical life-saving decisions but letting the human still feel like they’re in control — an increasingly common theme in automation.

Take a back seat

Robots in the driving seat?