Comment: Space junk is a danger to human life and future exploration

Professor Minna Palmroth, head of the Space Physics Research Group at the University of Helsinki, argues that we must rethink our current approach to space if we are to keep it open for use by future generations.

According to NASA there are approximately 23,000 pieces of debris larger than a tennis ball orbiting the Earth and travelling at speeds up to 17,500 mph, but the millions of smaller pieces of space junk can also cause major problems - Framestock via stock.adobe.com

Imagine a car on the highway – with the driver collapsed on the wheel, leg still on the accelerator, while more cars keep joining the same lane. That’s how we currently decommission many spacecraft – we just leave them in orbit.

Space has become a megatrend. According to the European Space Agency’s Space Environment Report, we launched over 1200 satellites last year – three times as many as two years ago. SpaceX alone plans to add tens of thousands of more satellites in the coming years.

But the increased use of space comes at a cost.

Space debris – the rock that can shatter your windshield

Right now, more than 8000 tons of space debris orbits the Earth. In space, size doesn’t matter that much – big and small debris can be lethal. A paint flake that gouged out a chip from the window of the International Space Station is a threat to spacecraft just like the bus-sized zombie satellite Envisat that cannot be commanded to de-orbit. This is because all space debris, big or small, travels with a velocity of 7.5 km/s. In other words, a gram-sized particle in space has the same momentum as a fist-size rock hitting your windshield on a motorway.

You may think that there’s room in space and that the increasing number of new launches is not a problem. But as orbits get crowded, the risk of collisions increases – increasing the number of debris particles. This can lead to a phenomenon known as the Kessler Syndrome, where a thick cloud of tiny particles will eventually surround the Earth, preventing all future spaceflight.

Clearly, we need to ensure that space remains usable and spaceflight remains possible for future generations. But how can we achieve sustainable use of space? Sustainability is about finding a balance between several aspects of a whole, such that the whole remains available in the future. In space, the whole consists primarily of the physical environment, the satellites, and the users of the satellite data.

Caring about just one aspect damages the survival of the whole. Currently, we care about the economic returns, so we flood space with tens of thousands of cost-efficient satellites. We care about data, so we launch expensive, carefully built satellites on strategic orbits. But we do not focus enough on the physical environment. Consequently, our understanding of space physics suffers.

Space physics has a critical role in the sustainable use of space and the future of human spaceflight. Conditions in space determine how long satellites remain operational, sometimes even when they return to the atmosphere. In February 2022, Starlink lost 40 satellites due to a phenomenon called Joule heating. This is a wakeup call on why we should continue to study space physics. The phenomenon of Joule heating itself is known, but current quantitative understanding is so poor that there is no way to predict when and where it can occur. The same is true for dozens of other potentially critical space weather impacts on our modern society. We don’t know when ionospheric currents can cut our electricity, nor when the ionosphere swallows our aircraft radio transmissions making it impossible to fly through the polar regions.

We need to start thinking about the physical environment of space – such as our orbits – as an asset: something we care about, rather than a common-pool resource to be recklessly exploited. Big spacecraft should not be allowed to become zombies – they should be de-orbited safely before the end of mission. Small satellites should not simply be left in orbit. We don’t build a new car every time it breaks – we send it for servicing. Similarly, we need servicing technologies that enable operational spacecraft to continue the mission. We also need technologies to clean up the existing debris and prevent new debris from the increasing numbers of new launches. We also need to launch satellites for not just the economic returns or data needs, but to simply enhance our understanding of space physics.

Frustrated by waiting for space agencies to understand why it is critical to measure the near-Earth space by spacecraft, I established the Finnish Centre of Excellence in Research of Sustainable Space that builds and launches nanosatellites. Our aim is to prevent new debris. Sooner or later, all spacecraft become unusable in the harsh space environment. Before they do, they should be taken down, so that they don’t threaten other spacecraft. The Centre of Excellence studies near-Earth space physics, and develops innovative de-orbiting technologies. The open-source results can be used by anyone wishing to build durable spacecraft. The Centre will be launching its first CubeSat demonstrating resilient design and de-orbiting technology on 1 June 2022, with the aim of making a lasting impact in sustainable use of space and orbit safety.

Over 50 years ago we opened new doors with the first human spaceflight, unlocking the use of space for the benefit of all humanity. We need to make sure that this door to opportunity and advancement does not fall shut for future generations. As we continue exploring and commercialising space, we must rethink our current approach and adopt a more sustainable way to use space so that we can improve the wellbeing of people all over the world. 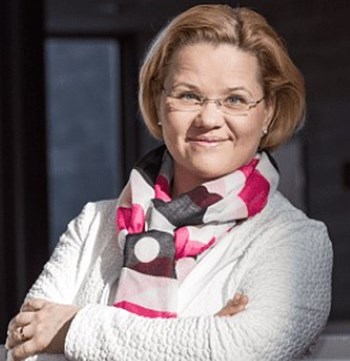 Professor Minna Palmroth leads the Space Physics Research Group at the University of Helsinki and is chair of the board at the Technology Academy Finland (TAF). TAF oversees the global Millennium Technology Prize, a €1 million biannual award recognising technological innovations for a better life.

More from The Engineer on space debris