Freak power: how biomass is helping the UK decarbonise

Senior Reporter Drax, the UK’s biggest power station, is slowly weaning itself off coal and replacing it with biomass. The Engineer took a look around to see what all the fuss was about.

Drax. For me, the name will always conjure images of the Bond villain from Moonraker, portrayed on screen by Michael Lonsdale. It also strikes me as one of the more obscure place names in the UK, sounding more like an industrial town in the Ruhr Valley rather than a picturesque village in North Yorkshire. The power station of course takes its name from the village, but it somehow seems to fit better with the concrete and steel of the chimneys, cooling towers, boilers and turbine halls that make up the facility. When I visited this week, the sky was an intimidating shade of grey, just as I had pictured it. 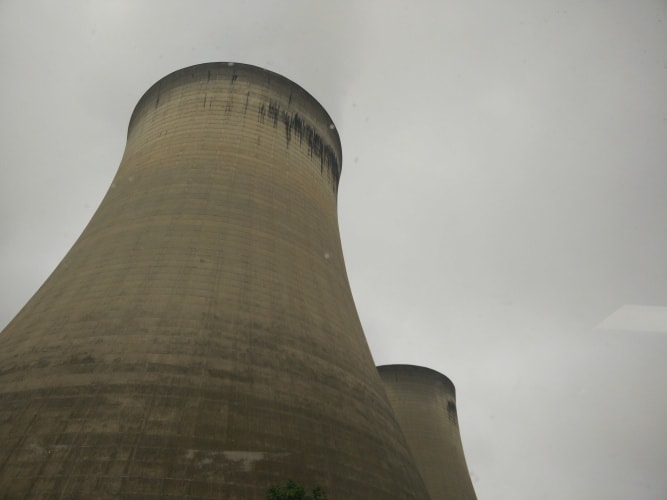 As the UK’s largest power station, Drax provides between seven and eight per cent of the country’s electricity needs. Since it was built in the 1970s, that electricity has come almost exclusively from coal, making Drax the single biggest source of carbon emissions in the UK. Over the past number of years however, the plant has started transitioning to biomass, with two of the six generating units already converted, a third almost complete, and a fourth awaiting the outcome of a government decision. According to Drax, this makes it Europe’s biggest decarbonisation project, with biomass conversion reducing CO2 emissions by 12 million tonnes a year.

The Engineer has written extensively about the biomass conversion, having recently spoken with Drax Group’s operations director Peter Emery. The wood pellets that are pulverised to dust and then burnt to fire the station’s boilers come largely from North America, where Drax has invested millions in the infrastructure required for their production. This includes facilities for turning the raw materials into pellets, as well as railheads for transporting the biomass to ports.

Processing wood into pellets in Canada and the US - then shipping those pellets across the Atlantic Ocean - does not on the surface appear to be the most environmentally friendly supply chain. However, Drax is keen to point out that the wood it uses to produce biomass comes from harvesting residues such as limbs and branches, rather than the higher value saw logs used for construction and furniture. The sheer volume of pellets it ships also means that the carbon footprint from transport is relatively low.

The CO2 emitted when the biomass is burnt has been absorbed during the life of the trees, making this part of the process carbon neutral. Overall, Drax claims the carbon emissions associated with biomass – including production and shipping – represent an 80 per cent reduction compared to coal. According to Matthew Rivers, Drax’s director of Group sustainability who oversees the North American biomass operation, the partner organisations across the Atlantic have also been carefully selected to align with Drax’s sustainability criteria.

Perhaps more importantly, biomass could play a central role in the country as a whole hitting its emission targets, softening the transition to renewables. The UK is legally committed to a 15 per cent share of the energy mix for renewables by 2020, with an 80 per cent carbon emission reduction pledged for 2050. While progress is being made with solar and wind, these energy sources are by their nature intermittent and unreliable. Tidal power will hopefully provide a more stable source of energy in the future, but the investments required are large, and the technology is still at a low level of maturity.

The cost and flexibility of biomass makes it a viable candidate to complement wind and solar, picking up the slack when conditions don’t favour those sources, while at the same time reducing our dependence on fossil fuels. Drax claims that to replace its current biomass generating capacity of 2,000MW with onshore wind would add £3.6bn to the costs of decarbonisation by 2020, and reaching the 2050 target without biomass would cost an additional £44bn. Ideally, one hopes that biomass, like nuclear power, will no longer be required one day, as cleaner forms of renewables evolve to fully meet our energy demands. In the meantime however, the priority needs to be reducing our carbon output by whatever means necessary. Compared to fossil fuels, biomass and nuclear offer a much safer path forward.

On the charge: How UKBIC is helping to accelerate the UK's battery manufacturing ambitions