Guest bloggerHead of Engineering, EADS AstriumBob’s involvement with the space industry goes back over 30 years. An aeronautical engineer by training, he specialises in stress engineering and the design of lightweight structures.

During the recent Farnborough Airshow, composite materials received notable attention in the mainstream press as they hailed the emergence of a new breed of robust, light-weight, ‘plastic’ aircraft. However, as Jon Excell pointed out in a recent blog post, the engineering community is no stranger to the advantages of composite materials.

In the space industry, we have used composites since the late 1970s, none more so than in the manufacture of satellite antennas. For antenna reflectors, the structural design drivers are low mass, high stiffness and most importantly dimensional stability, with reflectors having to operate over a temperature range of +160ºC to -180ºC whilst in orbit.

When compared with alternative materials, such as glass fibre or alloys, the dimensional stability that composites provide is absolutely vital in ensuring a high level of RF performance from our satellites. Most telecommunication satellites sit at 36,000 Km above the Earth and will typically have reflectors that are approximately two metres in diameter, radiating a power in the order of 100W – that is about the same level of power as a household light bulb.

In terms of antenna design, composites tick all the right boxes

Satellite operators cannot afford to waste this limited power as it is beamed back to Earth. Over two thirds of the planet is covered in water and population densities vary greatly, so telecommunication signals need to be focused on distinct geographical areas.

Composites provide a great deal of flexibility in the manufacturing process, enabling us to shape reflectors so that they can focus on specific countries or continents. To achieve this we conduct an RF analysis of a required geographical coverage, which in turn provides us with a set of three dimensional coordinates that can be fed into our CAD modelling system. A sophisticated piece of bespoke software then smoothes and creates a surface based on a nominal parabolic curve and distorts it to provide a shaped beam, which covers a precise area on the Earth. 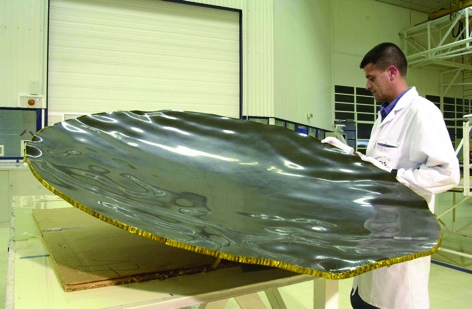 After verifying the proposed mechanical design with our RF engineers, the complex surface of a reflector is manufactured by using solid graphite moulds that are CNC machined to a specific profile. We used solid graphite to avoid any thermal distortion of the composites during the curing process, due to the fact that graphite has a very low coefficient of thermal expansion.

Critically this also reduces any ‘springback’ on the reflector’s composite surface and therefore maintains the precise shape we originally set out to achieve. Typically the reflectors we produce are composite structures with thin CFRP skins which sandwich an aluminium honeycomb or Kevlar core.

The resulting surface of the reflector is a series of discrete bumps and curves, which enable a satellite operator to, for example, provide direct-to-home TV over Europe whilst avoiding valuable signal power spilling over into the Atlantic Ocean, Northern Africa or the Middle East.

In terms of antenna design, composites tick all the right boxes in terms of providing a low overall mass, the structural stiffness to survive the loads and vibration of a rocket launch, dimensional stability in the temperature extremes of space, whilst ensuring signal accuracy and exceptional RF performance.

No wonder everybody’s talking about this ‘new’ material!

Disc with a difference