Just over a week ago, US company SpaceX - which is currently working with NASA on a billion dollar contract to develop rockets to supply the international space station - carried out the most successful test yet of its vertical take off and landing Grasshopper launch vehicle.

Rising to a height of 250m before hovering for a few seconds and then returning safely to its launch pad, the prototype rocket - under development for just two years - represents a major step forward in the Californian firm’s quest to develop reusable launch vehicles that could dramatically reduce the cost of access to space.

Meanwhile, earlier this week, Richard Branson’s Virgin Galactic moved a step closer to becoming the world’s first fully-fledged commercial space-line, following  the first test flight of Space Ship Two, the vehicle that could be taking paying customers into space as soon as next year.

Released from its twin-fuselage carrier aircraft (White Knight Two) 46,000 feet above Virgin’s Mojave Spaceport, the innovative craft  fired its rockets for 16 seconds, climbed to an altitude of 56,000 feet and achieved Mach 1.2, before  gliding into land just over ten minutes later. 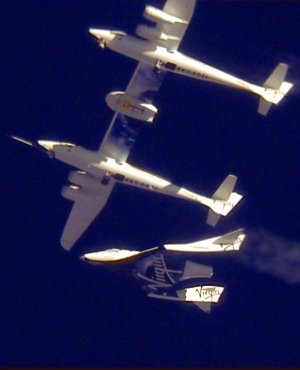 With the first test flight into space planned for later this year, it’s still unclear when Space Ship Two will take its first paying customers into space. But with 500 would-be space tourists already coughing up $200,000 for a trip aboard the ground-breaking vehicle, it looks as though a project once dismissed by many as a hare-brained vanity project could soon claim a distinguished spot in the history of manned-flight.

Many  - including some visitors to The Engineer’s site this week -have dismissed Virgin Galactic as self-indulgent vanity project, not the first time these kind of accusations have been levelled at Virgin’s billionaire owner. And indeed,  there’s no doubt that at a time when many are facing times of unprecedented hardship, the idea of a wealthy elite taking holidays in space does bring the fundamental inequality of life on earth into stark focus.

But Virgin’s efforts to kick-start a space tourism industry should not be viewed in isolation.

On The Engineer we’ve long argued in favour of the benefits of the space sector for a whole host of reasons - not least its role in inspiring young people to pursue a career in engineering. But we’ve always found that one of the most compelling arguments for investing in space is its role as a technology incubator for systems that have more down-to-earth applications.

At first glance - it’s perhaps hard to see where Virgin Galactic fits into this. But the spacecraft and its carrier vessel have been instrumental in pushing the boundaries of the use of composite materials in aerospace. Indeed, White Knight Two is the largest all carbon composite aircraft ever built

Much of this is down to the efforts of Burt Rutan, the engineer behind Space Ship One  - the first privately funded vehicle to fly into space.

Something of a pioneer in the use of composite materials for aerospace, Rutan’s contribution to the wider aerospace industry is hard to gauge. But it’s likely that when we look back upon a period where lightweight composite materials are becoming increasingly critical to the aerospace industry, his work, and with it te work of Virgin Galactic, will be viewed as highly significant.