Space: the next frontier for additive manufacturing

Johannes Gumpinger, an advanced manufacturing processes engineer for the European Space Agency, gives us a snapshot of the realities, the possibilities and the limitations of additive manufacturing – on Earth, in orbit and on other planets.

Discovery has always been a huge driver of space exploration and together with peaceful collaboration is a key element of the European Space Agency (ESA)’s mission. This thirst for knowledge and co-operation means that ESA is always striving to find the best, most effective ways to improve its missions and remain a key contributor to advancements in science and technology.

As recently reported by The Engineer, space programmes like NASA, ESA and private companies are already investing in and experimenting with the logistics of sustained space exploration – taking steps to make the International Space Station (ISS) and future space habitats more self-sufficient.

Additive manufacturing is already playing a key role in this – through its current applications on Earth and onboard the ISS, its near-term possibilities for further use on orbit, through to the fruition of current research into its future use on other planets. AM’s ability to produce small volumes of customised, technical parts quickly and efficiently lends itself to the space industry - which is why ESA has been developing and using AM technologies for the best part of 10 years to produce tools and equipment for use in space.

While controlling the entire AM end-to-end process remains challenging, using AM to produce hardware on Earth for use in space is still essential. AM’s design freedom enables significant increases in performance, combined with reduced lead times and costs make it a favourite for engineers – especially as the technology continues to advance, making way for achieving higher build rates, producing larger parts and using a more extensive range of materials. The technology in general is growing significantly, by up to 40% each year.

These advances in the technology support further discovery, enabling the manufacture of structures, which were not viable with traditional production methods up to now.

For example, we are currently working with a German company using AM to demonstrate the technology to build an optical bench for an X-ray telescope to be used in ESA’s Athena mission. The optical bench for this activity has a diameter of 3 m, is 30 cm high and is assumed to be able to host up to about a thousand mirror modules, which – once it is complete and launched into space – will observe the hot and energetic universe in the X-ray band.

Ultimately, we would like to be able to produce such parts on orbit - e.g. on board the ISS - to save on raw materials and launch costs. However, there are still hurdles to overcome to make this happen, as AM techniques used on earth today are not necessarily deployable under the specific space conditions including micro gravity.

That isn’t to say that additive manufacturing isn’t already proving useful in orbit. A 3D printer is currently in operation on the ISS for polymers, which is being used to produce functioning parts for the station. Ongoing technology development activities are also taking place to establish metal additive manufacturing equipment on board.

Once this challenge is mastered, the crew of the ISS – and future space habitats – will be able to recycle polymers and metallic materials brought during the mission to produce and repair the tools and equipment they need to keep things working without needing to ship them from Earth.

This will not only result in entirely enhanced mission logistics on the ISS, for example, but may also revolutionise the way in which spacecraft structures are designed today, as the structures will not need to withstand the launch process. Hence, they could be lighter and the manufacture would consume significantly less material. Extensive R&D is taking place to overcome the main barriers for printing metal parts in space, including microgravity and the limited availability of energy. The kind of raw material to be used may be substantially limited, as powders, for example, cannot easily be contained in the machine under microgravity, and would therefore pose a significant health hazard for the astronauts on the ISS.

AM on other planets

Another highly attractive possibility offered by Additive Manufacturing is the ability to manufacture on celestial bodies themselves, using local materials for structural applications. In other words, building shelters and structures out of ‘space dust’. Or more accurately, ‘regolith’ - the mixture of dust, soil and broken rocks found on the surface of the bodies. These robust structures would aid in longer-term manned research missions to Mars or the moon, providing protection for astronauts from radiation and micrometeorites, which constitute threat due to a very limited or the absence of an atmosphere.

While this is a longer-term goal that will require substantial funding before becoming more reality than science fiction, experiments are already being conducted on Earth, proving its feasibility as a concept. Within an R&D activity, a chemical AM process was used to transform moon regolith simulant, layer by layer, into a solid 1.5 ton demonstrator structural element. 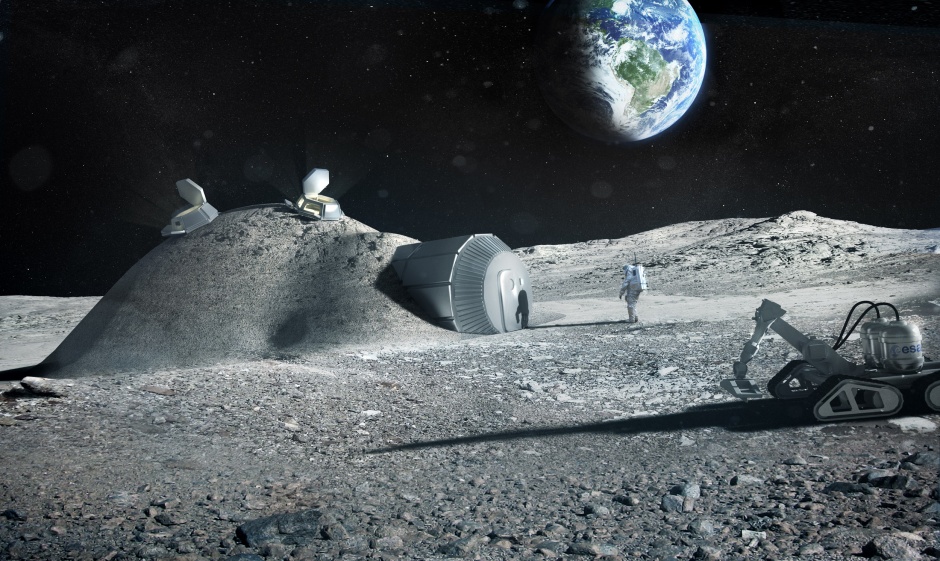 Whether it’s helping build the foundations of a telescope due to be launched from earth in 2028, revolutionising logistics of the ISS and the important work they do, or entering the realms of building life-sustaining structures on Mars, AM is a driving force for space engineering – on Earth, on orbit and on other planets.

If you’d like to learn more from Johannes about ESA and AM in space, register for this year’s Additive Manufacturing and 3D Printing International Conference which runs in Nottingham from 11th-13th July.

From part to system: the next generation of Additive Manufacturing

Comment: How the demands of space are driving additive manufacturing development