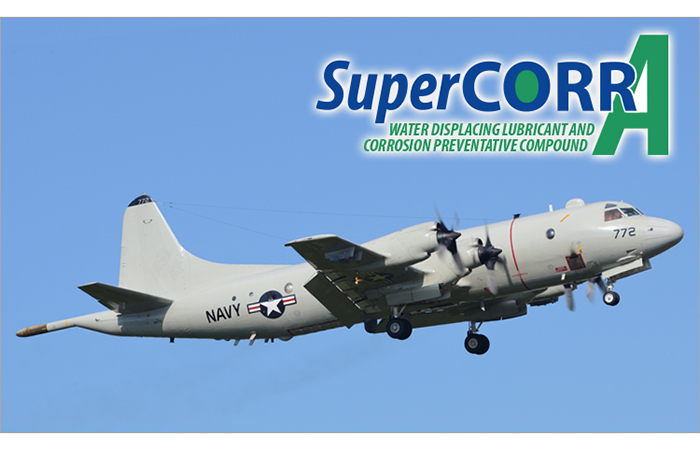 SuperCORR A provides advanced corrosion protection for aircraft - It lubricates and protects mechanical and electrical flight controls and electronic equipment in Lockheed Martin P-3C Orion aircraft flown by air forces around the world for anti-submarine and maritime surveillance, also used in searches for missing ships or aircraft.

The Royal Australian, Korean and Japanese Air Forces were employed in the search for the Malaysia Airlines flight MH370 Boeing 777 passenger jet which disappeared on a scheduled flight in March 2014. The search for debris in a vast area of ocean, bigger than the land area of Europe, southwest of Perth, Australia operated for thousands of hours at low levels but failed to locate any debris and was suspended in 2017.

The maintenance schedules specify SuperCORR A to lubricate and protect the flap tracks and screw jacks in the wings of the aircraft which are constantly exposed to extremely corrosive salt laden air as the aircraft in search mode can be flown at very low altitudes of hundreds of feet for long periods.

SuperCORR A lubricant and protective coating is widely used by the military, electrical, electronics and aerospace industries for critical applications to give the protection needed in extreme conditions. SuperCORR A deposits a dry protective film with excellent corrosion protection and lubricant properties plus the added advantage of a hydrophobic surface rejecting water that ensures the easiest and best connections for very close spaced connectors, contacts, wiring and moving parts

SuperCORR A, a Type I, Grade B Corrosion Preventative lubricant out-performed 11 other products in comparative testing to identify the best product to protect and lubricate the flap tracks and screw jacks on the aircraft.

The flap tracks, located in the aircraft's wings, are what the flaps slide on when they move up or down to lower or increase speed. The screw jacks engage and retract the wing flaps. Corrosion on any of the surfaces can lead to snatching or vibration which can affect the pilot's control

Due to constant operation in salty and corrosive atmospheres which need post-flight rinses and monthly washing down of the aircraft re-lubrication and corrosion treatment for the flap tracks and screw jacks is required each time, with conventional lubricants, to prevent rusting.  SuperCORR A was evaluated against competitive products under the Federal Test Method Standard #791B, using a five percent Salt Spray Corrosion Test.

SuperCORR A far exceeded the performance of the other products evaluated.  After over 200 hours of continuous exposure to salt spray corrosion, SuperCORR A protection actually increased over time where all the other, similar, products failed early or contributed to an increase in corrosion.

The accelerated salt fog corrosion testing demonstrated that the application of

SuperCORR A which complies with MIL-DTL-87177B (revised MIL-L-87177A) also increased electrical operation to 1400 hours versus 100 hours for the control product used at that time. Technical manuals were updated to include the application for electrical and mechanical parts for civilian and military operations.

The most important conclusion from the historical data and prototype testing is the availability of this excellent corrosion preventive compound that has dry film lubricant properties. The application of SuperCORR A on aircraft components can reduce maintenance man hours, reduce part replacement costs, increase life of aircraft, safety, and readiness for operations.

Estimates for the maintenance cost for the US Air Force F-16 fleet can reach $500 million per year, the use at all military branches could reach billions of dollars per year. Applications at locations tested by the U.S. Air Force are not normally treated with corrosion prevention and control lubricants (CPC’s). These are the electrical connectors that are susceptible to subtle and not so subtle forms of corrosion that can interfere with the electrical operation of the F-16.

Testing by the U.S. Navy at NADEP Jacksonville incorporates not only electrical connectors, but mechanical and structural components as well. Future uses will also include ground support equipment. The properties of SuperCORR A are such that it can be used in a wide variety of applications and on any materials, metal or plastic. Properties of the SuperCORRA far exceed the requirements defined by the MIL-L-87177A specification. Many of the beneficial properties of the product are not required in the MIL specification.

EnviroTech Europe is a manufacturer and distributor of anti-corrosion, lubricants and coatings used on wiring, connectors, switches, circuitry, avionics.  Read the full report – ‘Use of MIL-L-87177A as a corrosion prevention compound’ in our Library https://www.corrosion-protect.com/resources

Please visit our website https://www.envirotech-europe.com/supercorr-a for information about other uses and applications for SuperCORR A.

Visit www.envirotech-europe.com/applications-and-case-studies for information about uses and applications for all EnviroTech Europe products.

All products are supplied and supported by EnviroTech Europe Ltd. Manufactured in the United Kingdom and available on short delivery times through our dedicated team of distributors worldwide.

supplied and supported by