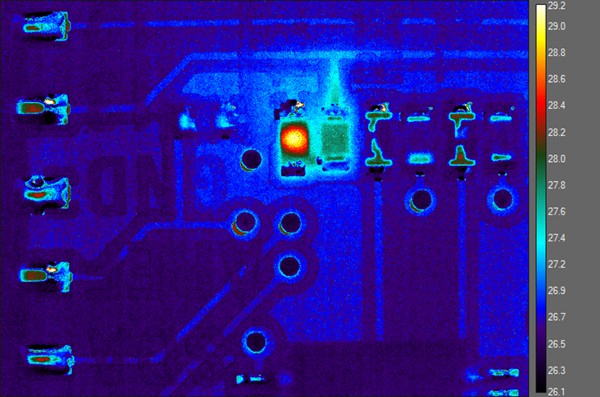 Thermal imaging cameras have been finding their way onto the factory floor for many years. Manufacturing and process engineering specialists have used thermal imaging cameras with great success for practically any automation application, including automated inspection, process control, condition monitoring, fire prevention & detection and continuous optical gas imaging. However, not all automation cameras are created equal and for some high-speed automation applications, dedicated and advanced thermal cameras are required.

Thermal imaging in an automation environment

Thermal imaging cameras use thermal radiation, which is not detectable by the human eye, but can be converted into a visual image that depicts thermal variations across an object or scene. Covering a part of the electromagnetic spectrum, thermal energy is emitted by all objects at temperatures above absolute zero, and the amount of radiation increases with temperature. A thermal imaging or infrared (IR) camera can capture thermal images of target objects and provide accurate non-contact temperature measurements. These quantitative measurements can be used in a variety of monitoring and control applications.

In some cases, a thermal camera is referred to as a smart sensor. In these cases the thermal camera has built-in logic and analytics that allows the comparison of measured temperatures with user-supplied temperature data. It also has a digital I/O interface so that a differential temperature can be used for alarm and control functions.

There is plenty of choice when it comes to thermal imaging camera systems for automation applications. A frequently asked question is therefore: Is a cooled or an uncooled thermal imaging system the better choice and which is the most cost effective? The component costs of the cooled and uncooled classed systems can be quite different, making it extremely important to decide which way to go.

A modern cooled thermal imaging camera has an imaging sensor that is integrated with a cryocooler. This is a device that lowers the sensor temperature to cryogenic temperatures. This reduction in sensor temperature is necessary to reduce thermally-induced noise to a level below that of the signal from the scene being imaged. Cryocoolers have moving parts made to extremely close mechanical tolerances that wear out over time, as well as helium gas that slowly works its way past gas seals.

Cooled thermal imaging cameras are the most sensitive type of cameras and can detect the smallest of temperature differences between objects. They can be produced to image in the mid-wave infrared or MWIR band of the spectrum where the thermal contrast is high due to blackbody physics. Thermal contrast is the change in signal for a change in target temperature. The higher the thermal contrast, the easier it is to detect objects against a background that may not be much colder or hotter than the object.

Uncooled thermal imaging camerasAn uncooled infrared camera is one in which the imaging sensor does not require cryogenic cooling. A common detector design is based on the microbolometer, a tiny vanadium oxide resistor with a large temperature coefficient on a silicon element with large surface area, low heat capacity and good thermal isolation. Changes in scene temperature cause changes in the bolometer temperature which are converted to electrical signals and processed into an image. Uncooled sensors are designed to work in the longwave infrared or LWIR band, where terrestrial temperature targets emit most of their infrared energy.

Uncooled cameras are generally much less expensive than cooled infrared cameras. The sensors can be manufactured in fewer steps with higher yields relative to cooled sensors and require less expensive vacuum packaging.  Also, this type of camera does not require a cryocooler - which is a very costly device - and has fewer moving parts.  As a result, an uncooled camera tends to have a much longer service life than its cooled counterpart under similar operating conditions.

Advantages of uncooled cameras beg the question: When is it better to use cooled thermal imaging cameras for automation applications? The answer is: It depends on the application.

If you want to see the minute temperature differences, need the best image quality, have fast / high speed applications, see the thermal profile or measure the temperature of a very small target, visualize thermal objects in a very specific part of the electromagnetic spectrum, or synchronize your thermal imaging camera with other measuring devices, then a cooled thermal imaging camera is the instrument of choice.

Cooled cameras have much higher imaging speeds than uncooled ones. Automation cameras such as the FLIR A66xx series can have image speeds up to 480 frames per second and are therefore ideal for capturing high-speed thermal events and moving targets. This is important, for example, when the manufacturing quality of high-speed conveyor belt applications need to be monitored. The capture rate of uncooled thermal imaging cameras is simply too slow to capture the speed of this type of application.

Cooled cameras have very fast response times and they make use of a global shutter. This means that they will read out all pixels at the same time, as opposed to reading them out line by line, which is the case with uncooled cameras. This allows cooled cameras to handle moving objects much better. This is especially important in the process industry like paper processing, or in high-volume manufacturing, where things move fast and cannot be slowed down. Cooled cameras will also accurately monitor fast changes in heat-up processes.

You can clearly see the benefit of a 50mK sensitivity uncooled thermal camera by comparison with a 20mK sensitivity cooled thermal camera. Let’s illustrate this with a quick sensitivity experiment. For this comparison, someone put their hand on a wall for a few seconds to create a thermal handprint. The first two images show the handprint immediately after the hand was removed. And the second set of images shows the thermal handprint’s signature after two minutes. The cooled camera can still see most of the thermal signature of the handprint, whereas the uncooled camera only shows the partial remains of the handprint. The cooled camera clearly can detect smaller temperature differences and for longer durations than the uncooled camera. This means the cooled camera will provide better detail on your target and help you detect even the faintest of thermal anomalies.

Precise camera synchronization and triggering makes the cameras ideal for high-speed, high sensitivity applications. Working in snapshot mode the FLIR A66xx is able to register all pixels from a thermal event simultaneously. This is particularly important when monitoring fast moving objects where a standard IR camera would suffer from image blur.

The images in are a good example. You drop a coin and have a sensor trigger the camera to take an image. Two drops of the same coin will trigger the camera at the same time giving you the object in the same position every time. With a microbolometer you would not catch the coin at all and if you did by luck it would be blurry, positioned anywhere in the image.

One of the great advantages of cooled thermal cameras is the ability to easily perform spectral filtering in order to uncover details and take measurements that otherwise would be unachievable with uncooled thermal cameras. One application is the quality monitoring of a plastic calendaring process.

FLIR offers a solution for practically any automation application: from uncooled, low-cost cameras to high-end thermal cameras like the FLIR A66xx. The FLIR A66xx is ideal for high-speed thermal events and moving targets and incorporates a cooled Indium Antimonide (InSb) detector. The camera produces crisp thermal images of 640 x 512 and achieves a high thermal sensitivity of <20 mK. The FLIR A66xx is able to capture the finest image details and temperature difference information. The camera supports image frame rates up to 480 frames per second when operating in windowing mode. Custom cold filtering options for specific spectral detection and measurement are available. Perfect for imaging through glass, measuring temperature of thin film plastics, filtering different wavebands for laser profiling and detection, or optical gas imaging.