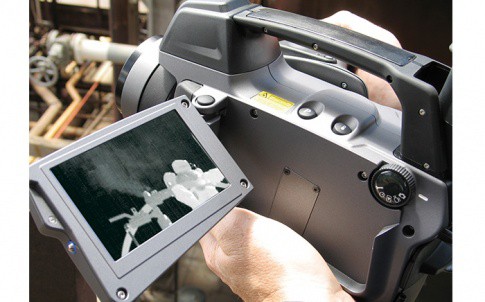 The operation of an electric power generator produces large amounts of heat that must be removed to maintain efficiency. Depending on the rated capacity of the generator, it might be air cooled, hydrogen cooled, water cooled, or in the largest capacity generators, a combination of water for the stator windings and hydrogen for the rotor. Hydrogen cooling offers excellent efficiency thanks to low density, high specific heat and thermal conductivity.

The technical note discusses how maintenance of hydrogen-cooled generators is critical for the safe and efficient operation of a power plant. Finding and repairing hydrogen leaks from the cooling system can be difficult, time-consuming and potentially dangerous due to the explosive nature of the gas. Traditional methods for hydrogen leak detection tend to be unreliable at finding the source of the leak and better at finding a general area where hydrogen is present. The use of the FLIR GF343 OGI camera is shown to improve the efficiency and performance of leak detection considerably.

The FLIR GF343 OGI camera uses Carbon Dioxide (CO2) as a tracer gas, which is readily available at generating stations. Carbon Dioxide is inexpensive, has a much lower GWP, and

The authors describe because only a small concentration of CO2 (3-5%) needs to be added as a tracer gas to the hydrogen to make leaks visible to the OGI Camera, the purity level of the hydrogen in the turbine is maintained and normal generating operations are allowed to continue.

As leak detection can now be performed under full operation using the GF343 saves time and money reducing shutdown time by several days representing a lost revenue saving of $80,0000- 100,000 / day. Consequently, the payback and return of investment by using CO2 as a tracer gas and the FLIR GF343 OGI camera is significant.

The FLIR GF343 OGI camera uses a sensitive Indium Antimonide (InSb) detector spectrally adapted to provide optimum performance at 4.3 microns. This spectral tuning is critical to the optical gas imaging technique and, in the case of the FLIR GF343 this makes the camera specifically responsive and ultra-sensitive to CO2 gas infrared absorption.