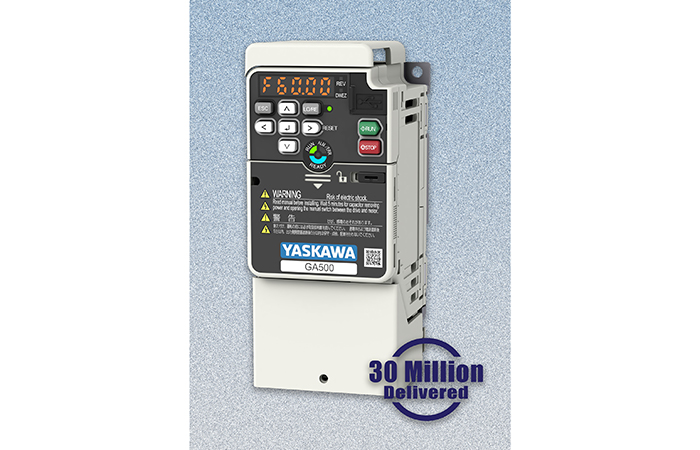 Motion Control technology group YASKAWA has recently delivered its 30 millionth inverter drive and also reached 20 million units in its servo drives division. Active in the servo drives market since 1959, the company was the first to develop a DC servomotor, known as the Minertia Motor. This was followed by the first AC servomotor series in 1983 and then in 1992 by the Sigma Series, which has been refined into the current Sigma 7 Series.

Yaskawa began developing and producing inverters in 1974 with the world’s very first transistor inverter and today its current generation is the GA500 Series of variable speed drives which set new standards in performance. These compact inverter drives help users to simplify complex technologies by combining outstanding reliability and ease-of-use with performance and adaptability.

The GA500 Series not only make the design, installation and start-up process easier, they also assist with trouble-shooting. The key features and functions include an integrated EMC filter, a two-channel safety function STO with SIL3/PLe, control of up to five inverters using just one fieldbus card, as well as intuitive and convenient set-up and monitoring via smartphone apps.

Founded in 1915 in Kitakyushu, Japan, today Yaskawa is a global technology supplier for drive and control technology, robotics and energy solutions. Since 1981 the markets of Europe, Africa, the Middle East and countries of the former Soviet Union are served by YASKAWA Europe GmbH located in Eschborn near Frankfurt.

Since the introduction of the three-phase induction motor in 1917, the company has repeatedly made technological history. For example, in 1969 it trademarked the term ‘mechatronics’, which is now used in all languages. In 1977 it began producing Motoman industrial robots and has since delivered well over 400,000 units worldwide. ENDS

Gauging success in measurement and inspection