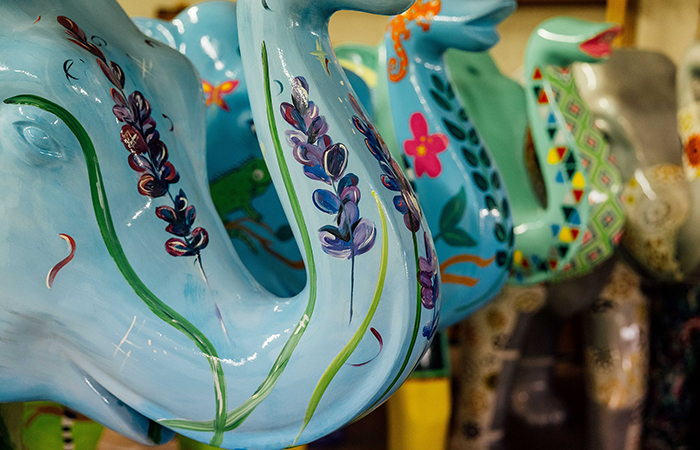 Yamazaki Mazak is supporting its local community by supporting a charity arts festival this summer in the city home to its European Manufacturing Plant, Worcester.

The global machine tool manufacturer is sponsoring one of 66 elephant sculptures that appeared on the city’s streets and public spaces from 12 July as part of Worcester’s Big Parade, forming an eye-catching art trail. After eight weeks on display, the elephants will be sold to raise money for St. Richard’s Hospice, a Worcester-based organization that cares for adults with serious progressive illnesses.

The Big Parade follows in the footsteps of the hugely successful Worcester Stands Tall giraffe trail in 2018, which saw giraffe sculptures displayed across the city before being auctioned off for a total of £210,000 for St. Richard’s Hospice. The 66 sculptures include 30 large elephants decorated by artists and 36 smaller calves crafted by schools and community groups from the city.

As well as sponsoring the ‘Strawberryphant’ elephant, Mazak has planned to carry out multiple internal activities during the eight-week summer period to raise money for charity. This includes holding a Euro 2020 Fantasy Football league, sponsoring miniature painting workshops with charity raffles, and selling a variety of strawberry-themed foods in the staff canteen, including strawberries and cream, and strawberry flapjacks. The company has been a major employer in Worcester for over 30 years, with a workforce of over 500 staff manufacturing in excess of 1,000 machines annually to a wide variety of industry sectors.

Sara Matthews, Business Development Manager for St Richard’s, said: “We’re delighted Mazak are joining us for Worcester’s Big Parade, as one of the city’s proud employers, and can’t wait for Worcester to meet the company’s elephant, Strawberryphant. Together we’re looking forward to helping local people reconnect with friends, with family, with colleagues and with the city over the summer.”

Mr Richard Smith, European Group Managing Director, Yamazaki Mazak UK Ltd, commented: “As a Worcester-based business, we are supportive of our local community and are always looking for new ways to help brilliant charities and causes. Worcester’s Big Parade will create many happy memories for local people this summer, including our own team here at Mazak who will enjoy the trail with family and friends.

“We’re so pleased to be sponsoring an elephant and supporting the care that St Richard’s Hospice provides to local patients and their families. After such a challenging year for everyone it’s wonderful to be helping the city smile again this summer.”