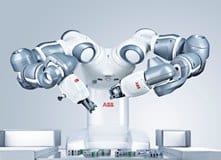 ABB has announced that its YuMi robot, the world’s first truly collaborative robot, was honoured with a Golden Finger award as one of the best industrial robots of 2016 at the China International Robot Show (CIROS) in Shanghai, China.

ABB’s YuMi robot was specifically designed to unlock collaborative manufacturing, where people and robots safely work together on shared tasks. “There is an exceptional passion for innovation here in China. ABB is working closely with its customers to help transform their manufacturing and find new ways of unlocking the flexible, efficient ‘factory of the future’, today. Collaborative automation will certainly play a large part in this journey,” said Sami Atiya, president of ABB’s Discrete Automation and Motion division. “It’s a great honour for ABB to receive this recognition here in China and among distinguished peers at of the world’s most important robot technology events.”

In April 2016, ABB’s YuMi robot was recognised for outstanding achievements in commercialising innovative robot technology with the Invention and Entrepreneurship Award (IERA) during the Automatica trade fair in Munich, Germany.