Tapping the rich veins of mineral deposits that can be found beneath the seabed requires the application of new systems and technologies. Jon Excell reports

To most of us, it’s a murky netherworld of strange rock formations, bizarre-looking creatures and wildlife documentary makers.

But to a growing body of engineers on the fringes of the global mining industry, the seabed also represents an untapped source of mineral riches that could dwarf the deposits found on land.

The logic, according to Prof Greg Baiden, an expert in mine automation at Canada’s Laurentian University, is irresistible. ‘Twenty-nine per cent of the planet is above the water and 71 per cent is under. There is no reason to think that what’s under doesn’t have the same potential for resources as what’s above.’

The problem is that getting at these deposits requires the application of systems that have never been used for mining and, in some cases, new technology. Little wonder then that the world’s big mining corporations are watching with interest as Australian mineral exploration firm Nautilus prepares to take the first steps in this fledgling industry.

Bankrolled by a number of major mining companies, including Anglo-American and Teck — the world’s largest Zinc producer — Nautilus has advanced plans to exploit seafloor gold and copper deposits at its Solwara 1 mine off the coast of Papua New Guinea. It is specifically interested in mining what it terms Seafloor Massive Sulphides (SMS). 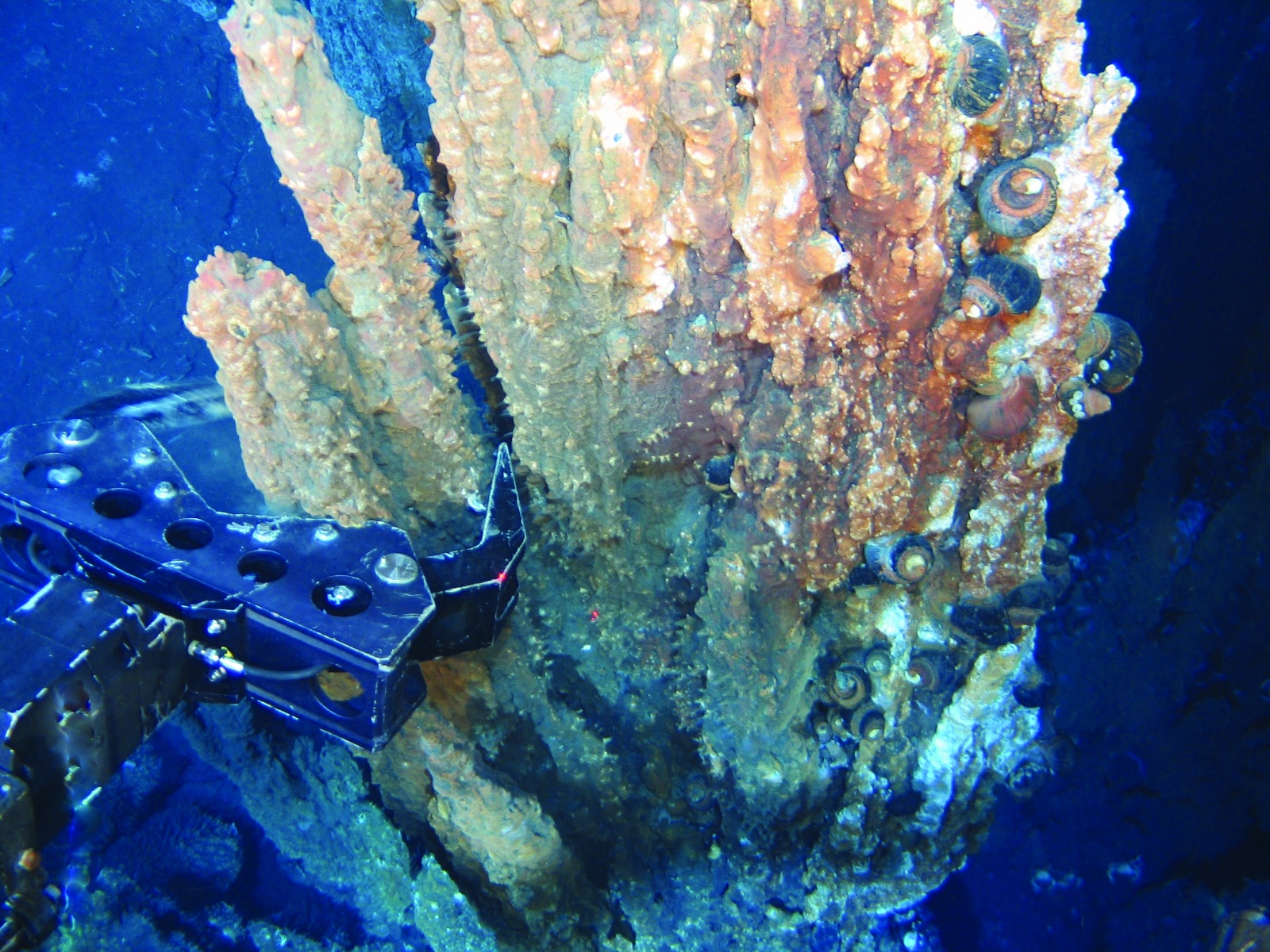 Stephen Rogers, chief executive officer of Nautilus, explained that these materials, rich in copper, zinc, gold and silver are often deposited on the ocean floor by so called ‘black smokers’ or hydrothermal vents found near geological faults. On contact with the near-freezing water of the ocean bottom the metals come out of solution and are crystallised on the seabed.

Because of this, once you’re actually on the seabed, getting at these deposits is relatively straightforward. Particularly when compared with land-based operations that often have to clear up to 2km of overburden before they can even begin extracting the goodies. ‘Deposits on land have been diluted and buried by tectonic action over hundreds of millions of years,’ explained Rogers, ‘material on the seafloor is much younger and it’s not buried… we have very little overburden or coverage. When you start mining you sit the cutting tool on the sea floor, start cutting and you’re cutting mineralised material straight away.’

The other big advantage is that the rocks on the seabed contain a much higher concentration of metals than the rock in surface mines. ‘If you were to look at a surface deposit you would find one or two per cent copper, one or two per cent nickel, and 1g per tonne of gold,’ said Baiden. ‘The deposits under water are 20 per cent copper, 25g per tonne gold. You could mine a few million tonnes a year with a deposit like that and do what people are doing on the surface with 20 or 30 million tones. The potential for it is huge.’ 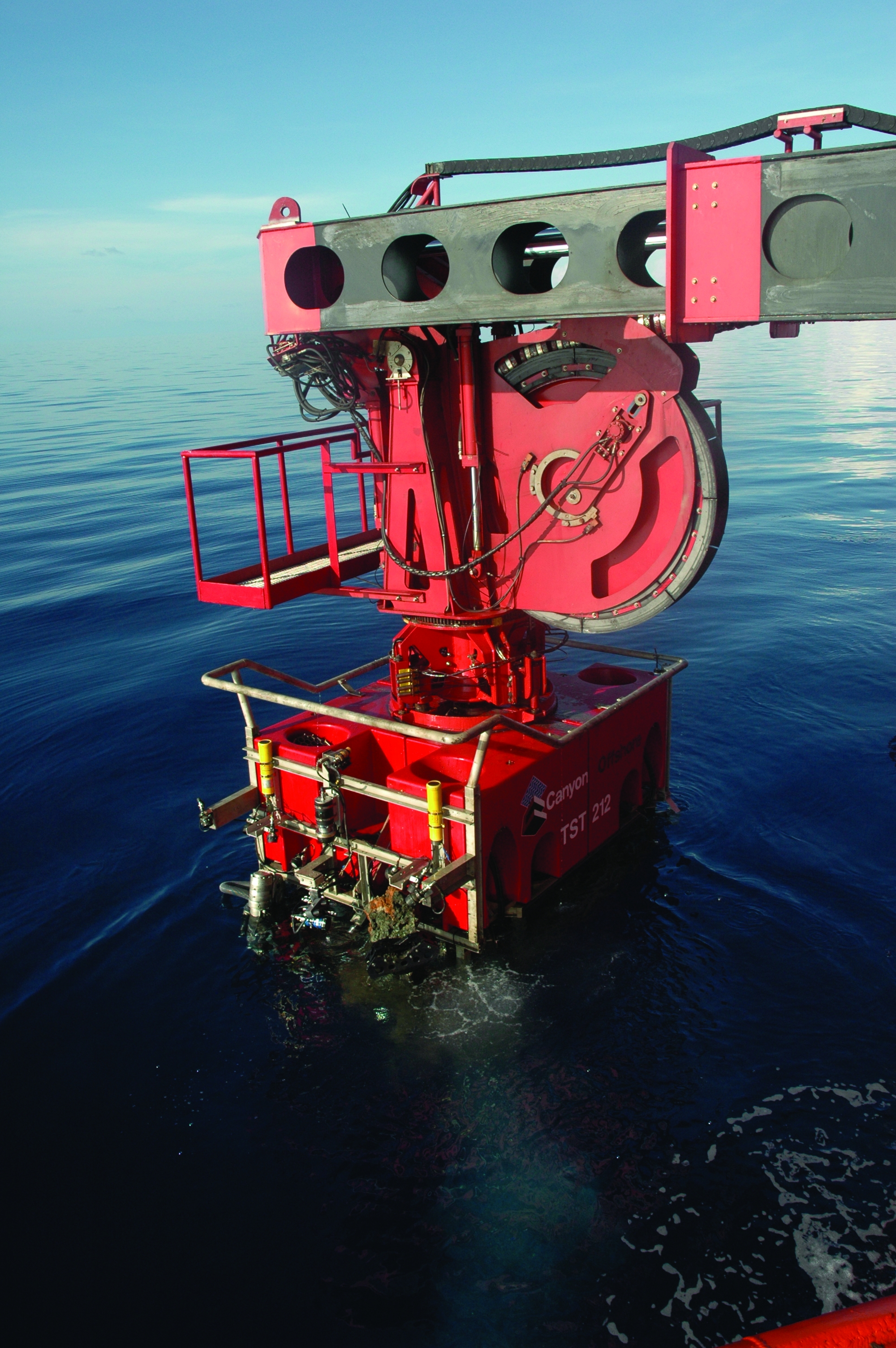 And while it may represent a new industry, Rogers added that seabed massive sulphide miners don’t have to start from scratch. For instance, much of the technology developed by the oil and gas industry since it began moving offshore in the 1950s can be applied to underwater mining. And, although no one has yet mined at the depths proposed by Nautilus, a number of companies, most notably De Beers, have been mining marine diamond deposits off the west coast of Africa for a number of years. These so-called secondary diamond deposits — which were eroded by river drainage systems and deposited in the sea — are usually found close to land and at depths no greater than around 150m. However, the giant dredging machines that sift the seabed for the precious stones are sometimes equipped with small cutting implements.

Solwara 1 was originally scheduled to start production next year but the economic slump has led to something of a slowdown. Nevertheless, Rogers still hopes to be up and running within the next two years and is adamant that when the mine does begin operating it will be far more than a small-scale demonstrator project. ‘It will be a full scale operation — 6,000 tonnes per day — we would expect to produce between 1.2 and 1.6 million tonnes per annum of material for treatment,’ he claimed.

Once the resources have actually been located — a search that is narrowed down by the use of geochemical sensors that can sniff out black smokers — there are, said Rogers, three main components to a subsea mining system: a seafloor mining tool, a riser system for getting the minerals to the surface and a surface support vessel. Although Nautilus has put the commissioning of a purpose-built support vessel on hold, work is continuing on the other two elements of the system. 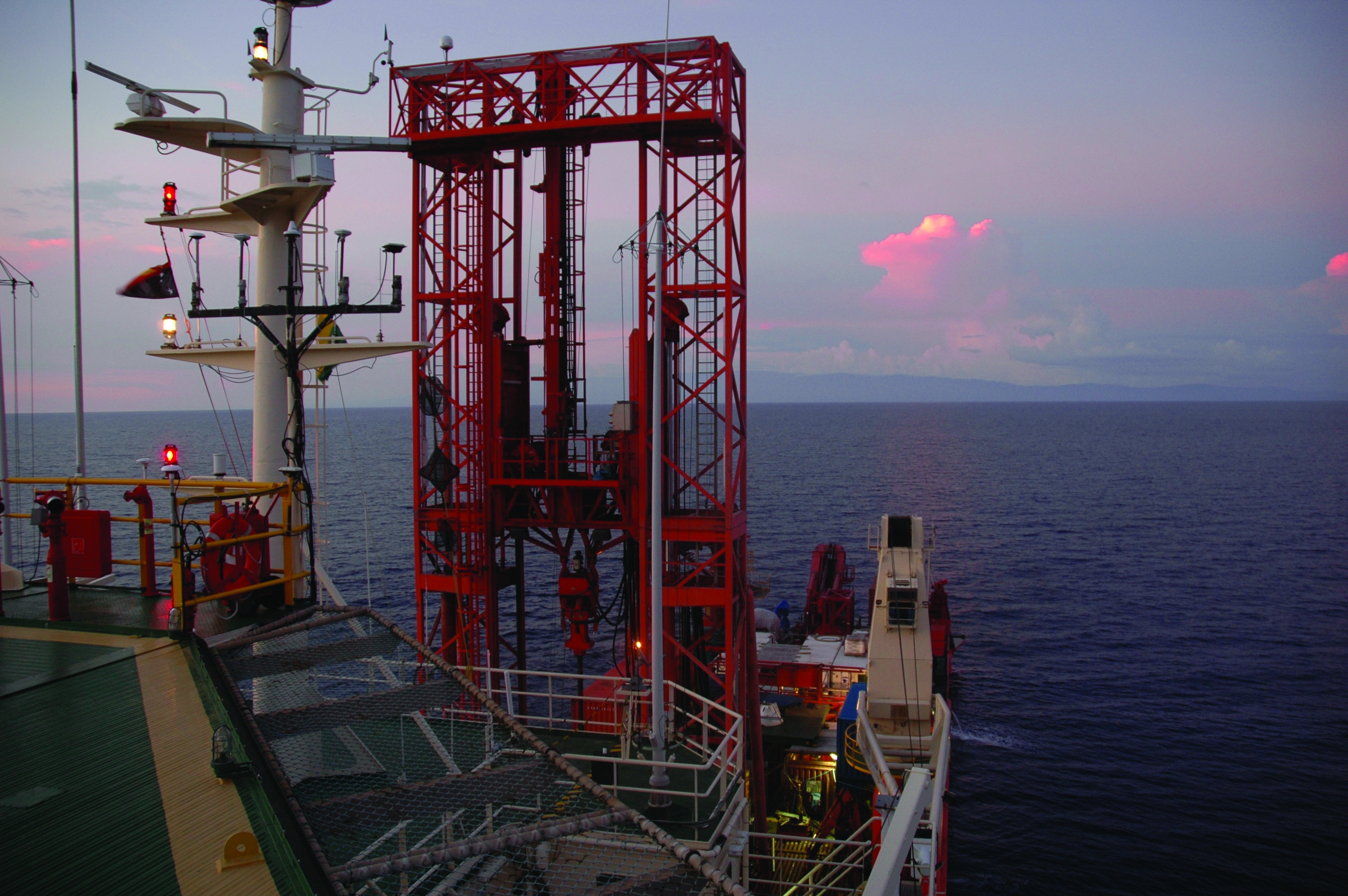 And few components are more impressive than the pair of enormous seafloor mining tools (SMTs) that are currently being developed under a contract worth £30m by Tyne and Wear subsea robot specialist SMD.

Mike Jones, company spokesman, explained that the vehicles — designed to cut up to 6,000 tonnes of rock a day — are lowered to the sea floor on a lift line that is disconnected when they reach the seabed. They remain connected to the surface vessel via a separate umbilical, which carries all the electrical power at high voltage down to the vehicle.

Rated to operate at 2,500m depth, Jones said that the system is being designed with two propulsion systems in mind: ‘The mine sites have very uneven terrain, so in the initial phase the miner has a walking system to cope with the terrain, and in the later stages of the mining process, once you’ve levelled the terrain you can replace it with a more conventional track system.’

He said that the machine borrows heavily from previous SMD projects. ‘They’re different to anything we have built before but we’re using as much proven technology as we can.’ Jones added: ‘We build subsea remotely operated vehicles … which go to depths that divers can’t go to and also build special machines for trenching the seabed. Over the past few years we have also developed technology for deep water to put in very high power — up to 2.4MW.’

Once extracted, the solid material is mixed with around 90 per cent sea water to create a slurry that is pumped to a riser and lifting system that is being developed by offshore specialist Technip.

A modified version of the kind of system widely used in the oil and gas industry, this is effectively a long steel pipe with a suspended pump on the end that pumps the materials from the sea floor up to the surface.

Once on the ship, the water is stripped out of the material and pumped back down to the seafloor where it is used to drive the pumping system on the riser. This means that no electrical power needs to be sent down to pumps on the seabed.

Compared to a land-based mine, said Rogers, it’s a relatively low manpower activity, requiring a surface crew of around 100 people while an equivalent copper mine on land would employ upwards of 2,000. He added that because so much of the work takes place beneath the surface, and doesn’t require the removal of huge amounts of overburden, seabed mining could actually be less damaging to the environment. ‘We don’t have a lot of the infrastructure difficulties you have with land-based mining where you have to put roads into wilderness areas, build power plants and strip a lot of overburden material off before you can start mining; there is an attraction in this type of activity.’ He also claimed that because of the high grade of the mineral deposits, seabed mining also has a relatively small footprint. For example, the Solwara 1 operation — which will cover an area of around 1km by 200m — will have a footprint claimed to be around 1/40 of an equivalent copper mine on the surface.

Nevertheless, the bottom of the ocean is a relatively unexplored environment. Tinkering with the balance of life on the seabed could have untold consequences say those opposed to Nautilus’s plans. Rogers claims to be mindful of these concerns and Nautilus has commissioned an in-depth environmental study, that he said addresses such fears. Perhaps more intriguingly, Baiden suggests that seabed mining operations could work in harmony with life on the seabed. ‘The animals that live around these things breathe in the nastiest stuff that can be produced by a volcanic reaction and breath out seawater — you could go and mine, and your environmental clean-up is done by the animals around you. If we could figure out how to bring that back and put it into play back on land — that’s as big as going after the mines underwater.’ 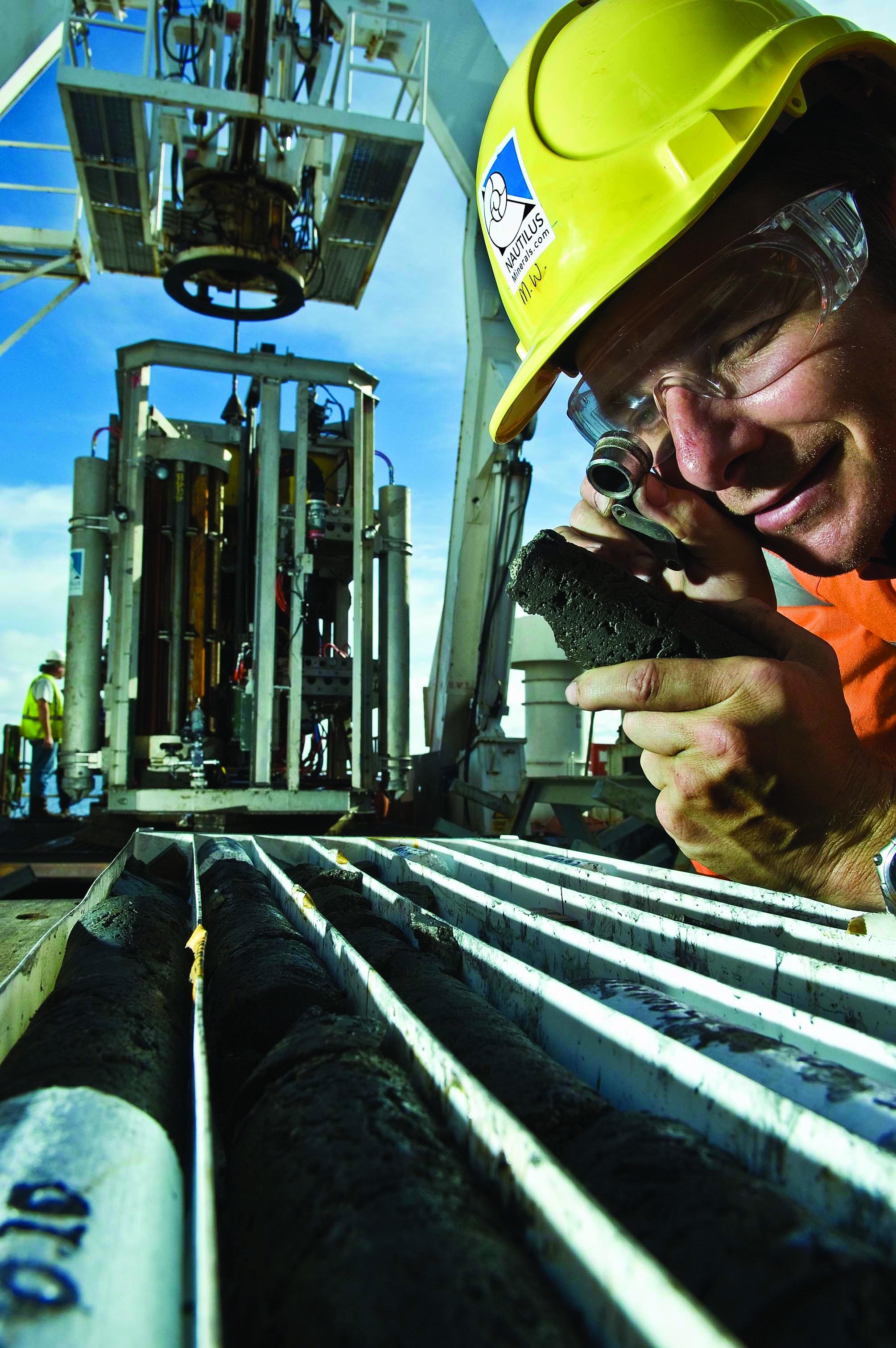 Baiden has an interest in seabed mining taking off. His own company, Penguin Automated Systems, has developed an optical underwater communications system that he believes could be vital in the development of future subsea mines.

While a single tethered robot will be sufficient for smaller operations such as Solwara 1, Baiden claimed that large-scale subsea mining will require swarms of underwater robots, and that deficiencies in existing subsea communication technology and the extremely high cost of tethers are a major stumbling block.

The key element of the system, dubbed the Wireless Underwater Optical Communications Network (WUOCN), is a spherical dome covered in LEDs, each of which can switch on and off 40 million times a second. Able to transmit, receive, encode and decode sequences of these flashes of light, a series of these devices placed in the water at intervals of around 400ft could, said Baiden, be used to create a high-speed wireless network that works beneath the waves. Baiden, who will begin testing a network of the devices later this summer in a freshwater lake in Canada, said that the operation of the system is analogous to mobile phone masts: ‘The technology would work like cell towers, you can hand off from cell tower to cell tower and create a large area of light that and could create a large coverage area for many, many untethered robots… .’

Back to the present, and all eyes are on Nautilus, which has so far raised around $350m (£214m) of funding from investors including Anglo American, Teck Resources and Russia’s largest iron ore producer Gazmetal, which owns a 20 per cent stake. ‘There’s a lot of interest in the mining industry… and a lot of other companies are watching closely to see how we get on in this new frontier,’ said Rogers, who sees promising parallels with what’s happened in the oil and gas industry. ‘I can see a situation in 15-20 years where there is quite an active offshore mining industry. If you look at oil and gas it pushed offshore in the 1950 and 1960s it has slowly grown where some 26 per cent of oil and gas is produced offshore — there is a precedent and what’s more we don’t have to develop the technology, we are able to work at these water depths today without having to reinvent the wheel.’

Ultimately, believes Baiden, our utter dependence on metal will make seabed mining inevitable. ‘Everybody’s using metal in one shape or form. You can’t make an axe without metal so you can’t use wood, you can’t make a shear to cut a crop without metal. If our surface deposits run out we are going to go somewhere else, because not having the metal is not an option.’