When Andre Geim and Kostya Novoselov first isolated graphene in 2004, it opened the door for a wave of innovation based on the wonder material’s jaw-dropping properties. Until now, however, it’s fair to say the Nobel-winning discovery has had limited impact for the average consumer. But that could all be about to change.

Wearable electronics, sports equipment and smartphones have all hitched their wagons to the graphene hype train in recent times, playing on the material’s incredible strength and conductivity. In many cases, its inclusion is probably more beneficial to marketing departments than actual end users, although we’re also finally seeing some products that are genuinely tapping into graphene’s enormous potential.

Canadian startup Ora’s GrapheneQ (GQ) headphones fall squarely into the latter category. GrapheneQ is the company’s proprietary composite material, used to make the 40mm acoustic drivers that actually deliver sound to the ear. Consisting of more than 95 per cent graphene, it retains most of the material’s mechanical properties, while at the same time being easier to shape and less expensive to produce. Rather than recreating graphene’s single layer of carbon atoms, GQ consists of flakes of graphene deposited in thousands of layers bonded together with proprietary cross-linking agents. It is lightweight and stiff, with a low density, making it an ideal material for loudspeaker membranes.

MORE GRAPHENE APPLICATIONS FROM THE ENGINEER

“Without a doubt, the most exciting aspect about the technology is the unique mechanical properties it holds,” Ari Pinkas, Ora’s co-founder and business lead, told The Engineer. “It is very uncommon for such a rigid material to be so lightweight. This rare combination of high stiffness and low density allows for some pretty cool things in the audio world. To start with, acoustic transducers are already notoriously inefficient: less than 10 per cent of the energy that goes into a loudspeaker gets translated to sound, over 90 per cent simply turns into unwanted heat.”

Having an ultra-lightweight speaker membrane results in a considerable power saving, something that’s particularly desirable for wireless consumer electronics such as smartphones, portable speakers and Bluetooth headphones.

“The fact that GrapheneQ is so lightweight means that it takes considerably less energy to move than other materials,” said Pinkas. “More concretely, Ora has observed up to a 70 per cent extension in the battery life of an audio dedicated device when doing physical A/B comparison measurements replacing a loudspeaker’s original membrane with a GrapheneQ cone.”

While battery life is easily quantifiable in the lab, audio fidelity is more subjective. Over the years, speaker manufacturers have used everything from paper and plastic to wood, ceramics and Kevlar in pursuit of the perfect diaphragm material. Audiophiles will tell you that each has its own unique audio signature, interpreting the bass, mids and highs of music in various different ways.

According to Ora, the frequency response of its GQ drivers is unmatched, delivering tonal balance right across the sound spectrum. Lows gets a restrained two decibel boost, with the mids tilted slightly towards the low end to provide warmth and tone. At around the 6 kHz point, the sound signature dips slightly, smoothing out highs for a softer top end, before sweeping up again to provide added clarity and detail in the very high frequency range above 10 kHz.

But what does all this mean for the user? Ora sent me a review pair of GQ headphones so that I could judge the technology for myself, and the sound quality is undeniably impressive. Aphex Twin’s Xtal was punchy and clear, with the bassline benefiting from the subtle low-end boost but the synths and vocal sample sounding crisper than ever. Van Morrison’s Sweet Thing had a richness and depth that I hadn’t experienced with any previous set of headphones. Every instrument – from double bass to flute – was generously afforded space alongside Morrison’s soaring vocals.

The headphones have touchpad controls on the right earcup that were easy to use, and the lambskin leather pads were comfortable to wear for my hour-long commute. They can be listened to wired or wireless and also feature a digital microphone for taking calls. If I had one complaint, it’s that they are a very chunky set of cans and felt a little weighty on the head compared to my over-ear Sennheisers. While product design was of course important, Pinkas explained, Ora’s main focus was always going to be substance over style.

“As you can imagine, given Ora’s limited resources as a startup, we had to prioritise certain aspects of our product development,” he said. “The vast majority of our efforts went on the development of our material science technology and making sure its implementation generated the levels of sound realism that is expected from graphene’s ‘superman-like’ properties. Unfortunately, with under five employees directly working on the GQ Headphones, there was no way we could compete with the resources big brands like Bose and Beats may have for flawless product design. And we are OK with that, they can beat us on the design build, we can beat them on what matters to us – sound quality.”

Although the company has raised cash through crowdfunding and will be delivering GQ headphones to its backers, Pinkas says the long-term future for Ora is unlikely to be as a consumer brand. Instead, he envisions GQ technology being licensed out to established electronics manufacturers – similar to the Dolby business model – who are looking to incorporate some graphene wizardry into their products.

“At one point we thought about pursuing both B2B and B2C strategies, but the pull from big consumer brands was so aggressive – especially those working with micro-speakers – that we are most likely going to focus on getting GrapheneQ ready for integration in other companies’ devices,” said Pinkas. 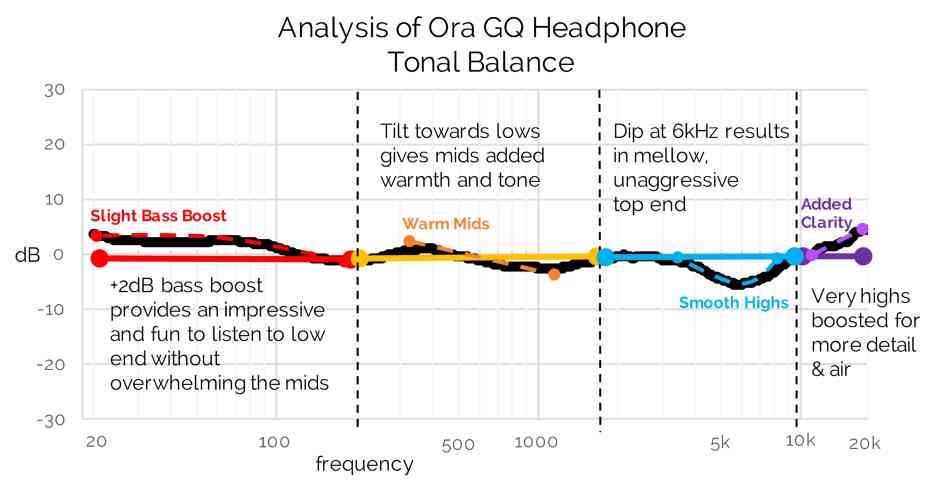 “We are basically a bunch of chemists, materials scientists, audio engineers…there’s not many marketers at Ora. The plan at the moment is to focus our efforts on including our patented graphene materials inside the next generation of consumer devices – we’re already working closely with major brands paying us to develop solutions for their headphones, hi-fi tweeters, TVs, smart speakers, laptops and even smartphones.”

The focus on graphene’s technical benefits rather than simply its marketability as a new wonder material is what should ultimately separate Ora from the snake oil and the shysters. As well as endorsements from Grammy-winning classical conductors, GQ has been acknowledged by Kostya Novoselov as “one of the first consumer products to feature a high-content graphene technology.” When he and Andre Geim were collecting their Nobel Prizes over a decade ago, headphones and speakers were probably not at the forefront of their thoughts, but GrapheneQ might just be the first mainstream application that’s worthy of their discovery.