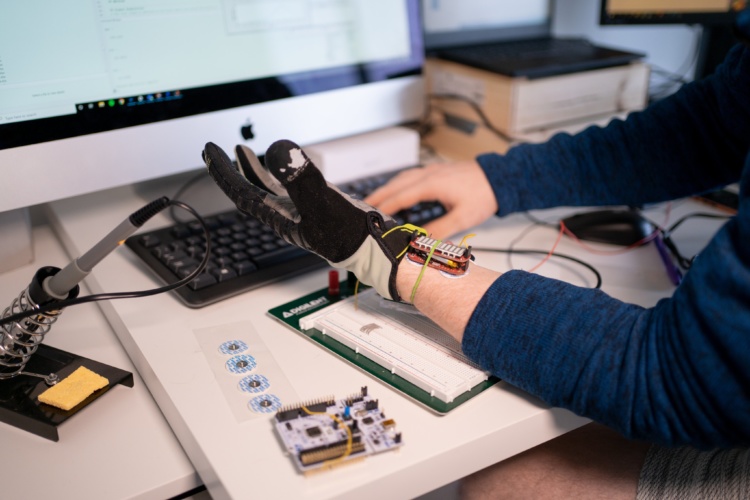 Set up by four recent engineering grads, BioLiberty is aiming to help the 2.5 million people living in the UK who suffer from hand weakness because of age or illnesses such as multiple sclerosis, motor neurone disease and carpal tunnel syndrome.

The company’s robotic glove detects a user’s intention to grip by using electromyography (EMG) to measure electrical activity in response to a nerve’s stimulation of the muscle. An algorithm then converts that intention into force, helping the user hold an item or apply the necessary pressure to complete an activity.

BioLiberty co-founder Ross O’Hanlon was motivated to start the company when his aunt was diagnosed with multiple sclerosis and began to lose movement in her hands. Noticing that she was struggling with simple tasks such as drinking water and using the TV remote – and with a lack of appropriate support for his aunt – Ross and his fellow engineers took up the challenge.

“Being an engineer, I decided to use technology to tackle these challenges head-on with the aim of helping people like my aunt to retain their autonomy,” he said.

“As well as those affected by illness, the population continues to age and this places increasing pressure on care services. We wanted to support independent living and healthy ageing by enabling individuals to live more comfortably in their own homes for longer.

“While there are many gadgets on the market that address a specific grip challenge such as tools to help open jars, I wanted an all-encompassing solution to support a range of daily tasks. We founded BioLiberty while studying and we’ve already achieved a working prototype but, with a background in engineering, converting a good idea into a successful business can be overwhelming.

As with many start-ups, funding was piecemeal initially, but BioLiberty has now secured financial support from Edinburgh Business School’s Incubator, based at Heriot-Watt University.

“Up to now, we’ve funded the company from business competition awards so being accepted into the Edinburgh Business School Incubator programme is a huge boost,” Ross explained. “We’re confident that support of this type will help accelerate the glove into homes more quickly.