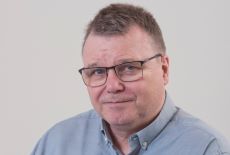 Hydrogen fuel cells have long been touted as the green answer for tomorrow’s long-distance trucks, but Ian Foley, managing director of Equipmake, disagrees.

The push to decarbonise the transport sector is locked in. And while the headlines have focused on passenger cars, large commercial vehicles have an enormous role to play.

HGVs are the lifeblood of any economy, transporting goods and services across countries and continents, for manufacturers they’re volume winners, so reducing their CO2 footprint is crucial.

On UK roads alone there are nearly 500,000 HGVs racking up millions of miles, and the vehicle parc is going to grow by up to 12 per cent by 2050. As vehicle numbers jump we need to find alternatives to combustion engines.

Batteries and hydrogen should be seen as partners instead of rivals

Billions are being invested in powertrain electrification, but much of the funding has gone into hydrogen fuel cells for HGVs. It was assumed battery electric technology couldn’t deliver the energy and power densities required for long distance, heavy weight commercial vehicle duty cycles and the charging infrastructure would be challenging.

But there’s a revolution coming. Hydrogen isn’t the silver bullet many had hoped for and battery technology continues to develop so rapidly that it’s now a legitimate cost-effective alternative.

First, the uncomfortable truth: hydrogen has been pushed by the fossil fuel industry because it’s produced from methane and the incumbents can readily manage the infrastructure. But hydrogen’s drawbacks aren’t solely about an industry not wanting to shift too far from convention – it has numerous other shortcomings.

The future is battery electric

Yes, hydrogen fuel cells can deliver long ranges and quick refuel times, but at what cost?

Production can be expensive, involves the creation of even more CO2, is difficult to transport and isn’t actually incredibly power dense. And there’s another element that is perhaps even more important: in automotive applications durability is a major concern.

Hydrogen fuel cells require a platinum catalyst, and even if you ignore the possible supply concerns regarding this expensive material, it breaks down quickly in the system. Hydrogen simply presents many potential problems when it comes to reliability.

Look at one of the world’s biggest HGV manufacturers to see how the tide is turning. Earlier this year Scania, which had invested heavily in both hydrogen fuel cells and electrified long-distance commercial vehicles, ruled out the former switching development to battery power.

Its reasoning was simple: hydrogen requires three times as much renewable electricity to power a truck compared to a battery electric system, it isn’t energy-efficient in terms of production, distribution, and conversion back to electricity.

And more practically, repair and maintenance are costlier as systems are complex – and, as a volatile gas, hydrogen requires more maintenance to ensure safety.

The future is battery electric. The technology has developed hugely, it’s now much more efficient, allowing trucks to cover hundreds of miles a day, and importantly for fleets the investment in battery-electric HGVs is returned in five years.

What’s more, because duty cycles for HGVs typically work on fixed or point-to-point routes, and the average daily distance travelled is only 250 miles, recharging infrastructure should be easier to develop. Charging points can either be installed at depots or destinations or trucks can use the growing network along routes.

There may still be chatter from some sections about the amount of energy and number of recharges needed for a 36 tonne HGV, but it’s worth noting that nearly 80 per cent of HGVs don’t carry their full weight and 30 per cent even drive around empty. So, stress on the system won’t be as great as some believe, making battery electric technology even more appropriate.

At Equipmake we can be part of the development journey. We create efficient powertrain technologies for HGV applications, whether that’s readymade powertrains for OEM partners of retrofit solutions.

We’ve already developed a highly sophisticated e-powertrain for 19 tonne buses and the bandwidth is there to integrate the system in other vehicles too. By simply adding extra battery packs to this modular system, our technology can support larger commercial vehicles such as 24 tonne fire engines and even HGVs.

The transport sector is set on the path to decarbonisation, and while hydrogen may find applications in other industries, the future for passenger, light and heavy commercial vehicles is most definitely battery electric.

This week’s poll: remote working or back on site?