Hyundai Motor Group has revealed TIGER, a robotic concept vehicle whose many capabilities include walking over difficult terrain thanks to its unique leg-wheel articulation.

TIGER (Transforming Intelligent Ground Excursion Robot) is Hyundai’s second Ultimate Mobility Vehicle (UMV) but the first to operate without a human at the wheel.

The robotic vehicle has been designed to carry payloads over remote and inaccessible terrain, with features including 360-degree directional control and a range of sensors for remote observation. It will also connect to unmanned aerial vehicles (UAVs), which could fully charge and deliver TIGER to the locations it is being designed to operate in.

“Vehicles like TIGER, and the technologies underpinning it, give us an opportunity to push our imaginations,” said Dr John Suh, head of Hyundai’s New Horizons studio in California, where TIGER is being developed. “We are constantly looking at ways to rethink vehicle design and development and re-define the future of transportation and mobility.”

A large load bay housed within its body could allow TIGER to carry goods for delivery or deliver aid packages in emergencies, and leg-wheel articulation will enable it to tackle extreme situations while keeping payloads level.

TIGER is said to be most efficient with its legs retracted, moving by rolling traction, but if it gets stuck or needs to travel over more difficult terrain it can use its walking ability to move over that area. This feature was previously seen in ELEVATE, Hyundai’s first UMV concept with moveable legs which was designed to carry passengers.

Industrial design consultancy Sundberg-Ferar is also working with New Horizons Studio to explore capabilities for TIGER such as traversing the surface of the moon or another planets. 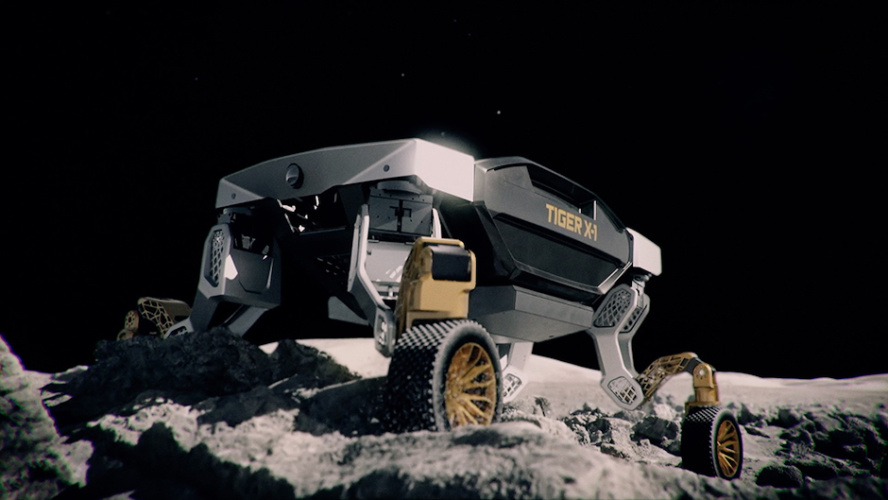 “While developing TIGER with New Horizons Studio, the team at Sundberg-Ferar was looking to create a robot that maximised the efficiency of wheeled motion with the articulation of a quadruped to expand the possibility of reaching more remote locations,” said David Byron, manager of Design and Innovation Strategy at Sundberg-Ferar.

“TIGER is a modular platform design allowing different bodies to be attached to the chassis for unique applications such as cargo delivery or surveillance in locations not suitable for humans.”

Poll results: Should industry step in and save Bloodhound?