Engineers at online grocery pioneer Ocado Technology have successfully trialled a humanoid robot able to help workers with a range of maintenance tasks at its automated warehouse in Hatfield, Hertfordshire.

The result of a five-year long collaborative project involving a number of European partners, the so-called ARMAR-6 robot is able to respond to natural language commands; hold and pass objects of a wide range of shapes and sizes; and even proactively step in when it judges that one of its human colleagues needs a hand.

According to those involved, the project has led to a number of key breakthroughs in robotic perception, task planning and human-robot interaction that pave the way towards the development of intelligent humanoid robots that could ultimately be used in a range of applications.

More on retail technology from The Engineer

The robot incorporates two compliant 8 degree of freedom arms with underactuated hands, a head with 5 cameras and a wheeled holonomic platform that enables it to move freely around a space. 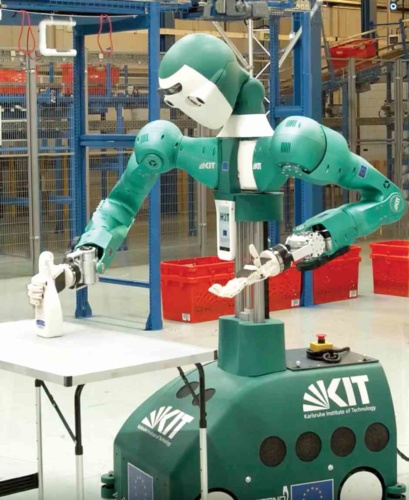 Not only is the system able to use both of its hands to grasp and manipulate objects and use tools such as power drills and hammers, but thanks to a high level of hardware-software integration, can recognise human activities and intentions, reason about situations, and interact with humans in a natural way – for instance working in collaboration with human to manipulate large objects.

“Robots with sophisticated manipulation, interaction and learning abilities, such as ARMAR-6 will provide a second pair of hands to people in need of help at home and at work,” explained KIT’s Prof. Tamim Asfour. “The achievements in the project are important steps towards building humanoid robots with embodied intelligence.”

Thanks to the development of specialised algorthims and control strategies the robot is able to understand and interact with the environment, and deal with unexpected situations and obstacles. These solutions include new algorithms for dynamic 3D scene understanding that can build geometric and semantic 3D maps of the environment, even when objects move independently from the camera.

Another key breakthrough is the creation of a speech interface that promises to make it easier for humans to collaborate with robots.

“The breakthroughs made in areas like natural language interfaces and task understanding will lead to better acceptance of ‘cobots’ by humans, and allow them to be used in a more easy, natural way,” said KIT’s Dr. Sebastian Stüker.

Whilst the system was trialled and developed in an industrial setting, Ocado Technology’s Dr Graham Deacon said that the technologies developed through the humanoid robot project could ultimately be deployed in a range of different settings.

“Humanoid robots are key for improving flexibility and safety in industrial contexts in a way that is genuinely useful. The same technologies which enable the ARMAR-6 to communicate and interact with humans, like natural language comprehension, soft manipulation and 3D spatial awareness, also mean the robot could be developed further to help in other situations, like in helping to reduce contamination, or in assisted living.”

The dual challenge of increasing diversity in engineering