Last week we asked our readers if they believed major engineering-related industries in the UK should be nationalised. 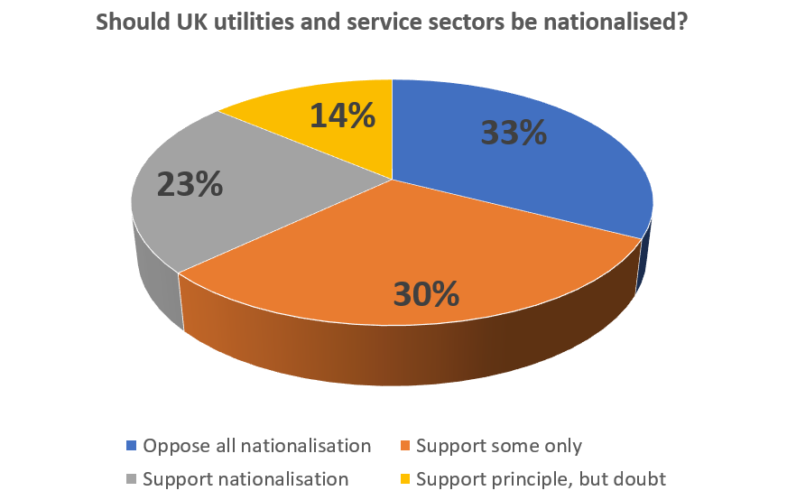 The Labour Party’s manifesto for the upcoming general election includes pledges to take several industries into public ownership; which would represent the largest nationalisation programme since the 1970s. Although in past decades many industries, including car manufacturers, were state-owned, the current manifesto confines itself to service industries and utilities. Jeremy Corbyn’s party proposes nationalising the Royal Mail, rail-operating companies, energy supply networks and water and sewerage companies, plus the eye-catching pledge of creating a state-owned broadband Internet supplier with free full-fibre coverage for all by 2030 by nationalising BT Openreach.

As all of these touch on engineering to some degree, we wanted to gauge readers of The Engineer on their thoughts. A third of respondents (33 per cent) oppose any form of nationalisation. While this was the most popular option, a total of 53 per cent – spread across two options – backed some form of nationalisation, with 23 per cent fully behind it and 30 per cent supporting some sectors or services coming back under public ownership. Around one in seven (14 per cent) said they supported nationalisation in principle but had doubts over its capacity for success.

“Those who oppose state ownership have to consider the reality that a large number of our key technologies and industries are already state-owned – just not by the UK state, ” said regular commenter Another Steve.

“And, with the UK taxpayer already subsidising foreign-owned franchises to the tune of tens of billions, UK state ownership could be more cost-effective. Private ownership isn’t working but it is costing us more and more money and with no obvious benefits for us but plenty, financially, for the private owners.”

Arthur Rayner was largely in agreement: “Railways are failing, utilities are failing and are expensive, top management salaries and bonuses are way out of kilter with the ordinary man/woman on the dear old “Clapham omnibus”,” he wrote. “Shareholders are greedy, absurd vanity projects such as HS2 and Heathrow expansion seem important to so few, so yes, maybe nationalisation which might seem a bitter pill to some, might just be the newfound form of regulation that our nation needs.”

But some readers were less convinced.

“I cannot think of anything which is currently run by any UK government or civil service that works, nationalising anything only creates inefficiency, institutionalisation and complacency,” said Robert T.

While others suggested compromises on the issue: “You do not need 100 per cent of the shares to stop a greedy asset-stripping board,” said John Hartley. “A one per cent golden share would do that. Far cheaper than taking the whole company into state ownership.”

As ever, the debate will be allowed to continue below. We would remind readers to familiarise themselves with our guidelines for the content of comments. We will delete comments which are not confined to the subject of nationalisation and stray into other political arguments.