A project inspired by the sci-fi film ‘Prometheus’ is developing tiny autonomous drones that can navigate and map unexplored subterranean environments beneath the UK’s rail network. 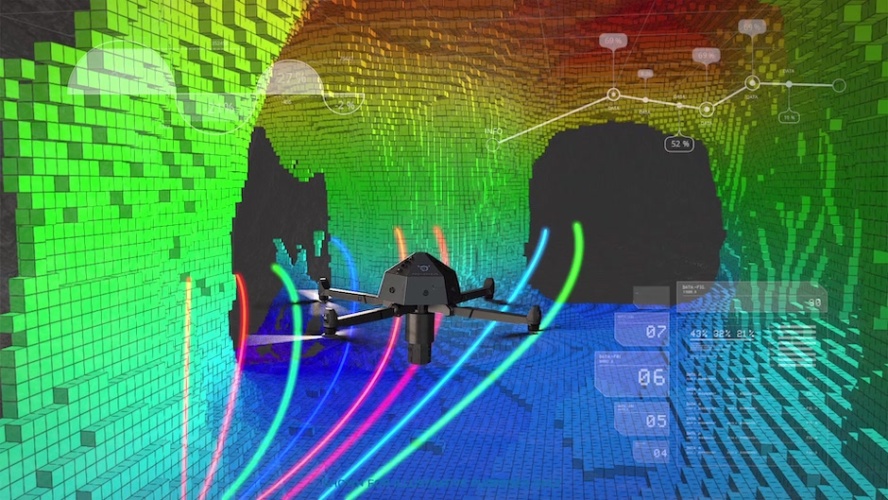 The £2.2m project, funded by Innovate UK, is a collaboration between Headlight AI, Callen-Lenz and Thales, the Universities of Manchester, Bristol and Royal Holloway London, and stakeholder Network Rail.

Due for completion in July, the aim is to provide solutions across industries where underground exploration in harsh conditions is crucial.

“We showed [Neal] some of the work that we’d done and he explained that his vision was to put a circular robot down a tiny 150mm [diameter] borehole next to a railway track,” Chhabra said. “There are thousands of these mines and voids under the tracks and they are interconnected – the limitation at the moment is that they don’t know what is beyond the line of sight, they don’t know what exists and how they are connected and so they aren’t being mapped or surveyed.”

Drones rise to the COVID challenge

The aim is for the drone to fold and squeeze through these small holes and travel far enough to reach unexplored caves and gather data. Watson pointed out the idea’s similarity to the 2012 film Prometheus, in which drones are shown mapping out an unexplored alien territory, inspiring the idea for the project, which has now completed several live trials in a Shrewsbury mine.

Headlight AI have been working on the 3D sensing aspect, developing a scanner called ‘Dragonfly’ which uses LiDAR to provide 3D images with a 360o surround view. Manchester University is working on the design of the drone itself alongside specialist drone manufacturers Calla-Lenz, whilst Royal Holloway is exploring the AI planning side of the project, working on how the robot will autonomously navigate the spaces. Thales is working closely with Headlight AI on the sensors.

The ‘Dragonfly’ scanner combines multiple miniaturised sensors with Headlight AI’s integrated software, allowing users to access the data it gathers through web-based apps where hardware can be controlled and configured. “It’s incredibly lightweight – we’re aiming for it to be 150-180g – and it’s not that power hungry, which is the main requirement for light drones,” Chhabra added, explaining that flight time would be one of the biggest challenges faced by the battery-powered drone.

“If we’re able to get the technology to a stage where the drone is small enough and it can operate for long enough and inspect utility pipelines and other types of infrastructure, that’s really exciting because it takes it beyond how it affects the railway networks and to how it could affect any underground infrastructure,” said Headlight AI co-founder Dr Jameel Marafie. “It’s a major challenge but that’s why we’re doing it, because it just opens up so many applications.”

Dr Tracey Skivington, electro-optics consultant at Thales UK added: “What is really exciting for us is the fact that Prometheus can operate in a GPS-denied environment and beyond visual line of sight. It could have important applications for our market in security.”